Event Review: Earth, Wind & Fire Brings the Party to the Capital on Day 7 of the Ottawa Jazz Festival

Day 7 of the 2014 Ottawa International Jazz Festival was by far the most-attended to date, with a record-breaking number of festival-goers who primarily made their way over to Confederation Park for a chance to see headliners Earth, Wind & Fire perform live.

Toronto-based modern jazz trio Myriad3 opened up the evening on the Main Stage to warm up the crowd for the headlining performance that followed. Formed in 2010, the collective, comprised of musicians Chris Donnelly on piano, Dan Fortin on bass and Ernesto Cervini on drums, had the opportunity to play in front of a large audience, which had arrived at Confederation Park early to get a prime spot for Earth, Wind & Fire. Myriad3 took advantage of this to introduce their sounds to those unfamiliar with the relatively young Canadian trio. Together they presented arrangements from their albums “The Where” and “Tell” including the compositions The Strong One, Fractured, Tell, and For The Dreamers, a peaceful melancholic piece that builds into a rising climax. Myriad3 concluded their set with Brown, a song off of “The Where” arranged by pianist Chris Donnelly.

After an hour-long intermission to prepare the stage for the headlining performance, Earth, Wind & Fire came out with a bang, not sparing one minute from their set. A impressive crowd of enthusiastic fans filled Confederation Park to see the group that’s still going strong perform live in Ottawa for the first time. The legendary band originating from Chicago that redefined pop music immediately set the tone for the celebration that ensued. Rocking shiny attire and showing off synchronized dance moves, Earth, Wind & Fire quickly turned the dormant sea of lawn chairs into a real dance party, getting everyone up on their feet and grooving and singing along as they performed hit after hit. It was a beautiful sight, and it continued throughout the 90-minute set. The energetic group opened the show with the contagious Boogie Wonderland followed by Sing a Song, My Promise, Shining Star, and Saturday Nite to the crowd’s delight. They slowed things down with After The Love Has Gone and Reasons and finished strong with Got to Get You Into My Life, September, Fantasy, Let’s Groove and In The Stone. There’s no doubt about it, regardless of their age, Earth, Wind & Fire still know how to engage a crowd and are experts at the art of showmanship. The smiles on festival-goers’ faces as they left the site truly said it all. 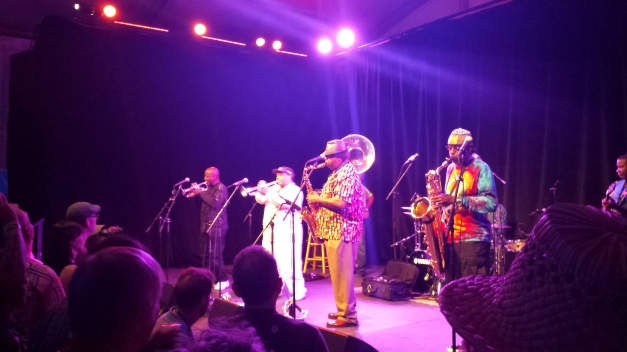 Afterwards, the excellent Dirty Dozen Brass Band kept the party going over on the Laurier Stage as part of the After Dark Series. Many festival-goers migrated from the Main Stage to the OLG Tent to catch the internationally-renowned New Orleans ensemble bring the funk. There was no way the public could stand still during the lively performance as the musicians kept the crowd dancing thanks to their tight on-stage chemistry and feel-good music. In celebration of their 35th anniversary, they performed arrangements from their latest studio album “Twenty Dozen” as well as a variety of older compositions. It was an excellent follow-up to Earth, Wind & Fire and the perfect way to end a groovy night of live music.

The 2014 Ottawa International Jazz Festival continues until July 1 at various locations and is set to feature live performances by Ben Harper, Aretha Franklin, the Hypnotic Brass Ensemble and a slew of other artists and bands.