Eventful Capital’s Weekly Picks: From Father and Suuns to Philip Sayce and Solids

Atlanta, Georgia alternative rapper Father is bringing his I’m a Piece of Sh*T Tour to Ottawa this Tuesday night. The hip hop artist will be giving a show at Ritual joined by Luidiamonds, Lord Narf and DillanPonders as well as locals Xuave & Svdvm, Yuukon, Luke Flywalker, Wavydrexler & Demar Defrozen.

Vancouver indie-pop band Said The Whale will be giving a special performance at House of Targ this Tuesday evening. The 5-piece, which has just embarked on a Canadian tour, playing two full sets: one of brand new material and one of fan favourites. The show is sold out, but you might get lucky via the Facebook event page if anyone’s looking to sell their tickets.

This Wednesday, April 20, Queering613 presents Swap Til’ You Drop, a clothing and accessories exchange happening at the Living Room at ACO. The free event, at which unswapped items will be donated, will also include board games, snacks, coffee and good tunes.

Detroit/Toledo indie/punk band Citizen will be playing at Ritual this Wednesday night. For the occasion, the Run For Cover Recs signees will be sharing the stage with Virginia indie punks Turnover, Hartford indie punks Sorority Noise and Bristol punk/grunge group Milk Teeth.

Montreal band SUUNS will be having an album release show at St. Alban’s Church this Thursday, April 21 to celebrate the launch of their new project Hold/Still. The indie electronic/rock outfit will be sharing the stage with Ottawa experimental bands Scattered Clouds and Pith & The Parenchymas.

This Friday, April 22, the School of the Photographic Arts of Ottawa (SPAO) is hosting a vernissage to launch Exhibition No. 11 at the school itself located in the Byward Market. The exhibition will present a collection of works by SPAO students and artists in residence. This year’s exhibition expresses the style of the artists whose works include creative and innovative processes using historic and contemporary photographic processes and tools.

Ottawa alt/country band Old Whiskey Road will be releasing their second album ‘Under The Neon Lights’ at Flapjack’s Pancake Shack this Friday, April 22. Local indie rock project Jack Pine will be opening the night and joining in on the fun times.

Are you a fan of the late David Bowie? If so, chances are you’ll want to make it over to the next “I Can’t Believe It’s Not: David Bowie Greatest Songs” happening this Friday night at St. Albans Church. This time around, members of local bands Fet. Nat, Hilotrons, Boyhood, Silkken, Jon Hynes and The Acorn will be performing some of the artist’s most popular songs in front of a live audience. Advance tickets are sold out but there will be limited tickets at the doors.

October’s Very Own Roy Woods will be making an appearance in Ottawa this Friday night for the second Views From The 6[13] event. The Toronto-based hip hop and r&b artist will be live inside Ritual for a night filled with all the best music from the 6ix, OVO and more.

If you’re into thrash metal, head over to House of Targ this Friday night to check out Montreal thrash & roll band Reanimator who’ll be playing with Ottawa melodic metal group Venator and Ottawa party rock favourites In Heat.

Toronto-based guitar prodigy Philip Sayce, previously Melissa Etheridge’s guitarist, will be returning to the capital city this week to play not one but two back-to-back shows at the Rainbow Bistro. The Canadian blues rock musician will be performing live this Friday and Saturday night in an effort to promote his latest project Influence and it’s bound to be special.

Over at Irene’s Pub this Saturday night, you should check out Canadian pop noir sensation The PepTides performing live. The Ottawa-based 9-piece band, known for its super energetic performance high in colour and contrasts, will be sharing the stage with special guests Briga. Definitely worth seeing!

The April instalment of Hip Hop Karaoke is going down this Friday night at the Elmdale with resident hosts DJ So Nice and Atherton. If you want to perform in front of a live audience and impersonate your favourite rapper by doing that track you spent hours memorizing in front of the mirror, there’s no better occasion.

Ottawa alternative indie rockers Good2go will be performing live at House of Targ on Saturday night and this time around, these veterans of the local scene will be sharing the stage with Ottawa garage rock n’roll group Road Haus.

The Fau Mardi collective are back at it this Saturday night and this time around they bring you Quebec City’s own Millimetrik. The electronic/hip hop/ambient beatmaker will be giving a live set at Daimon with Montreal-based/Hull bred electronic artist Rabieto. VJ Ina will be taking care of visual projections while the Fau Mardi crew take over the music selections after the performances. The dope poster alone should convince you to go. Do this! 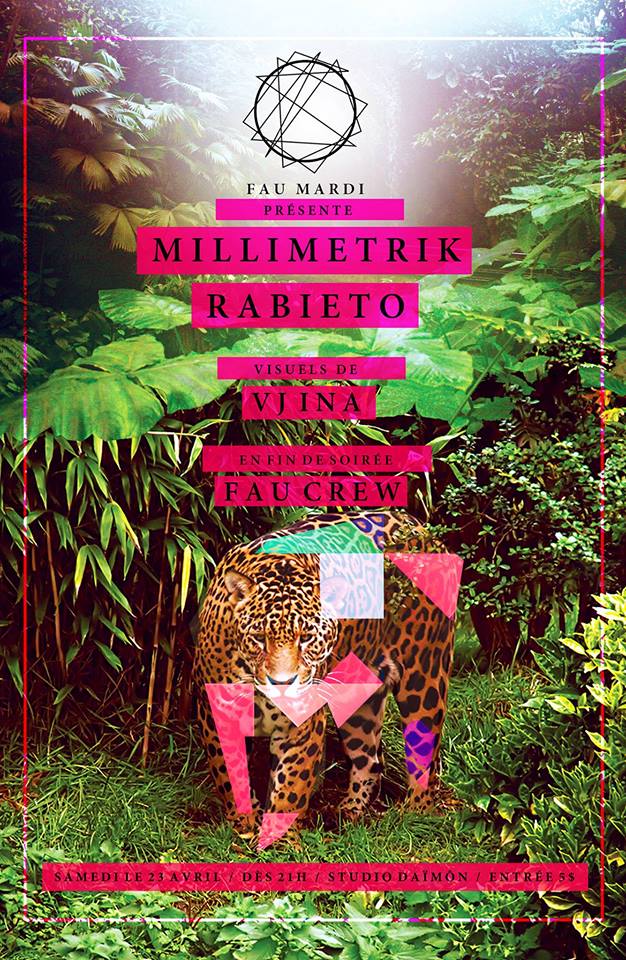 This Saturday night, the Oh My Jam dance party is having its Lettuce Turnip the Beet (see what they did there?) Spring edition at Babylon. This time around, the popular monthly will feature music selections by DJs Blackcat and Keuro.

Montreal punk/rock/grunge band Solids will be returning to the Petit Chicago this Saturday night after their last performance in Ottawa which goes back to November 2015. The guys, who have a brand new EP called Else that came out on April 15, will be sharing the stage with Montreal punks Bateau Noir and Montreal punk rockers The Pinsents. Having seen Solids perform live a few times, I can attest to the fact that these guys rock hard and that their shows are well worth it.

The Ottawa Dancers’ Bazaar, now known as Ottawa Souk, is making a return after reinventing itself. The event, being held this Sunday, April 24, will include shopping opportunities, workshops, yummy eats and more.