As August starts, so does the second portion of summer in the National Capital Region. The month ahead has tons of great events in store including the World Press Photo 2013 exhibition, the Casino du Lac-Leamy Fireworks, the Arboretum Arts Festival, the inaugural YouthCanSlam Festival, and the Gatineau Hot Air Balloon Festival.

To kick things off this week, the Festival Outaouais Emergent organizers will be unveiling the full programming on Wednesday, July 7 at the 4 Jeudis in the Hull sector of Gatineau. The Happy Hour evening, open to the public, will also include some surprises as well as reveal new things which will be part of this year’s festival.

This Thursday, August 8, Ottawa-based group Paterson Hall will be performing live at the Mercury Lounge alongside indie rock band No Island of Vancouver, Weird With Cats and Mubarak Farah and the Airliner Blues Band, both of Ottawa.  This is a great opportunity to discover something new and support local artists.

This Thursday, August 8, music lovers unite at Babylon Nightclub for The Boombox Diaries. The night of live music will feature a set by DJ Acro who’ll be joined by drummer Brendan Colameco, with whom he performed at this year’s Bluesfest. The event will also include the debut performance of hip-hop duo Ollie Proper and Joe Jitzu. Click the poster below for more info.

Ottawa-based band Bearshark will be giving a live performance at the Rainbow Bistro this Friday, August 9. The rock/blues group will be performing alongside local folk/blues singer-songwriter Keturah Johnson. This is another chance to catch some local grown talent live.

The good people at Ottawa Explosion have joined forces with Kichessippi Beer to bring you yet another installment of Funhouse! featuring musical guests Voicemail and Babysitter. The two indie groups from Ontario will be performing ive alongside DJs Craig Peru and Skid Vicious who’ll be playing select punk and new wave. 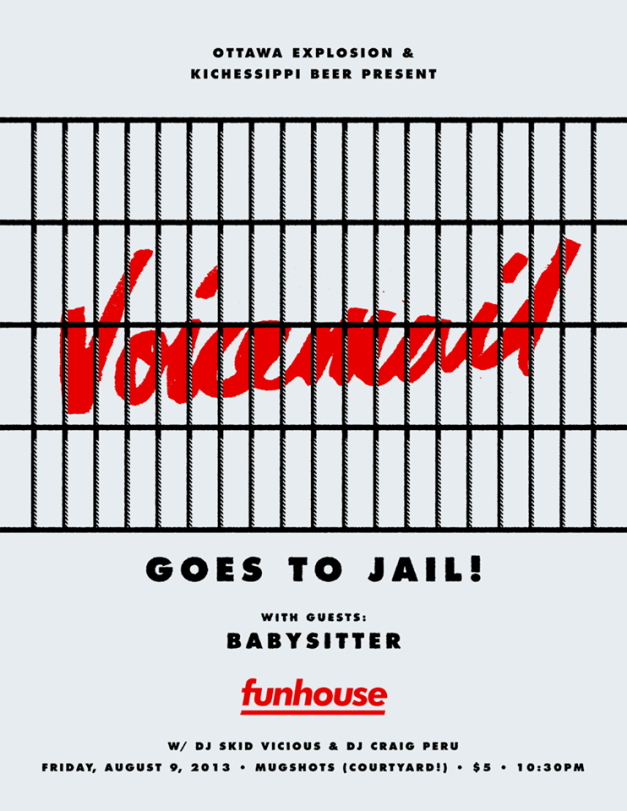 Over at the Mercury Lounge this Friday, August 9, Nordic Trax West Coast House DJ Luke McKeehan will be doing a live DJ set alongside resident DJs Lance Baptiste, Ray Ray and Balu. The Vancouver-based DJ will be spinning a mix of deep, tech and jackin’ house music.

It’s nice to see the picturesque grounds of the Canadian Museum of Civilization being used more frequently. As an example, the Powerhouse and Floorplay groups have teamed up to present live electronic dance music outdoors this Saturday, August 10. For the occasion, internationally-renowned DJs such as Cube Guys, Ryan Labelle, Paris & Simo, Arabika and Vito V will be giving live sets from noon to night.

Another fun event happening outside this Saturday, August 10 is Fau Mardi sur l’herbe brought to you by the Fau Mardi crew who’ve taken the party outdoors to the Imaginaire Park beside the Aylmer Marina. The collective is offering a free family-friendly event featuring guest DJs who’ll present a variety of electronic music styles every Saturday of August. You can get the entire program by clicking below.

The 18th edition of the Casino du Lac-Leamy Fireworks is taking place between August 10 to August 24. This year, the United Arab Emirates, Denmark, the Philippines, and the United Kingdom will compete in the annual pyromusical show for the winning title. Click below for ticket information and details.

If you’re more into folk and country music, then you may want to check out The String Masons and Marta Pacek performing live at Pressed Cafe this Saturday, August 10. The String Masons, an Ottawa-based bluegrass/country group, will be sharing the stage with Marta Pacek, an Australian-born alternative folk singer-songwriter.

If you’re craving some rhythm and bass, head over to Ritual this Saturday for a night dedicated to all things R & B. The music will feature the sound selections of DJs Laocapone, So Durand and Mystere. 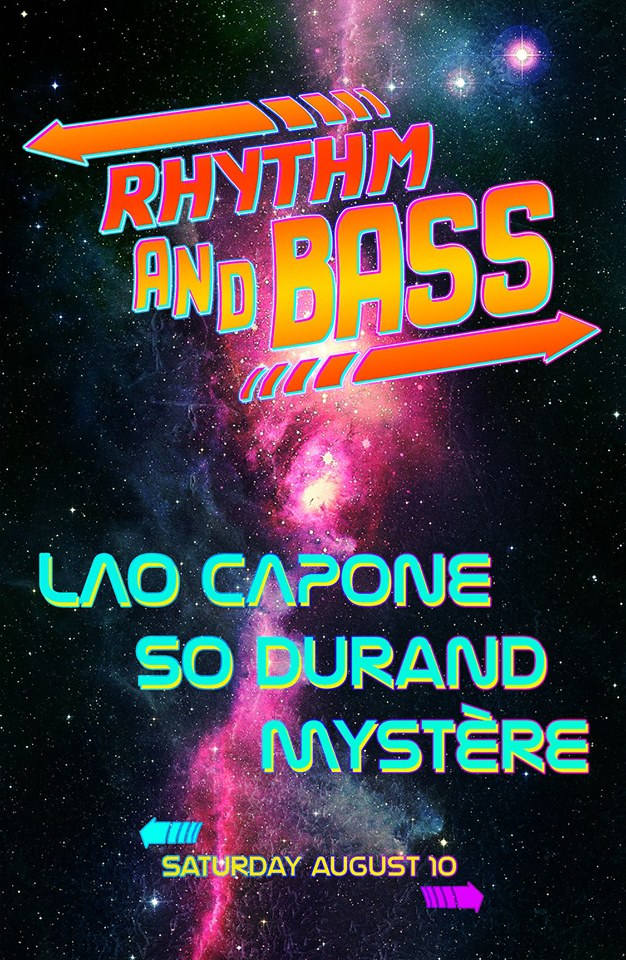 Hosted by Cashtro Crosby and Cityy Fidelia, I Put On For My City will highlight local hip-hop artists who’ll represent the 613 on stage at Ritual this Saturday, August 10 for a live show meant to showcase some of the capital’s musical talent. For the full lineup, click the event poster below. 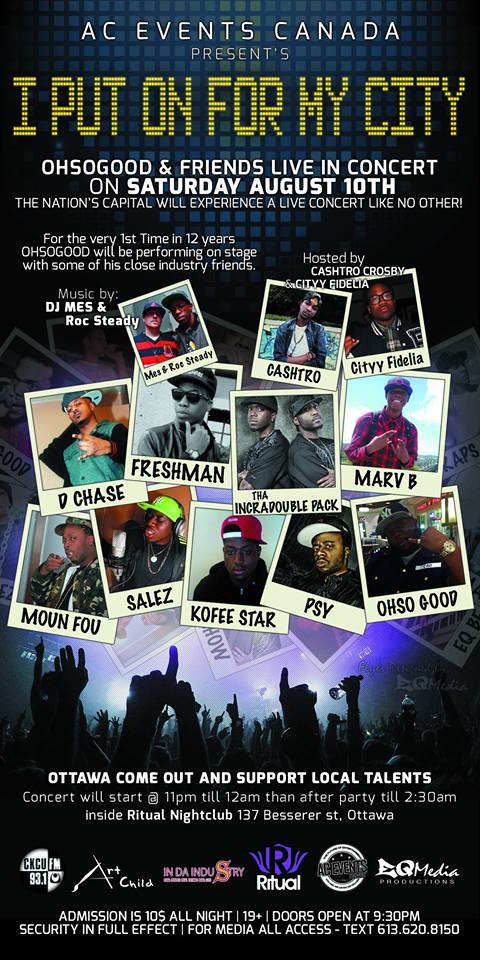 Florida metal hardcore group A Day To Remember will be in Ottawa this Sunday, August 11 to perform at the Ernst & Young Centre as part of the House Party Tour. The 5-member band will be playing live with San Diego post-hardcore group Pierce the Veil and L.A. melodic hardcore group The Ghost Inside.

Indie Montreal presents The Weeks and special guests live at the Mercury Lounge this Sunday, August 11. The Nashville-based alternative sludge pop group will be live in Ottawa as part of a series of North American shows. If you enjoy indie sounds and taking in new music, this is a show you probably want to check out. 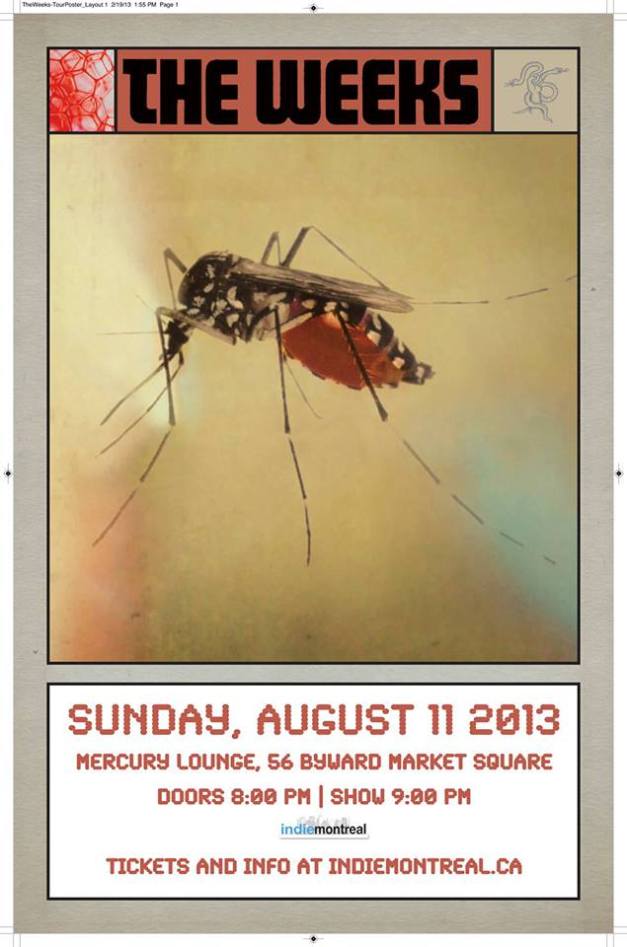