Another blog post, another week filled with events happening in Canada’s national capital. If you’re in Ottawa-Gatineau this week and have time to check out some stuff out, there’s no shortage of things to do. Take a look at Eventful Capital’s weekly picks below for a glimpse into the number of events happening in and around the National Capital Region in the coming days.

Detroit rapper Big Sean will be making his Ottawa debut this Wednesday, April 8. For the occasion, the 23-year old hip-hop artist who made the #1 spot on Billboard charts with his new album Dark Sky Paradise, will be giving an all-ages show at the EY Centre with special guests Swisha-T and DJ Mes.

Claude Munson is back in the National Capital Region after being away in Europe for a few months. To celebrate his return home, the local indie folk/rock singer-songwriter and guitar player will be performing live at the Blacksheep Inn this Friday night. For the occasion, he’ll be sharing the stage with Saskatoon folk rock band Dumb Angel and Montreal country/folk/pop group SUNFIELDS. Welcome back Claude!

Those of you who enjoy visual arts should check out the monthly Ottawa Art Battle, a unique concept organized across Canadian cities, brings 12 local painters together for a live painting competition. The event is taking place this Saturday evening at Arts Court. An annual National Championship eventually goes down in the summer to crown the top Canadian painter of the year. We’re getting closer to finding out who will represent Ottawa in 2015! 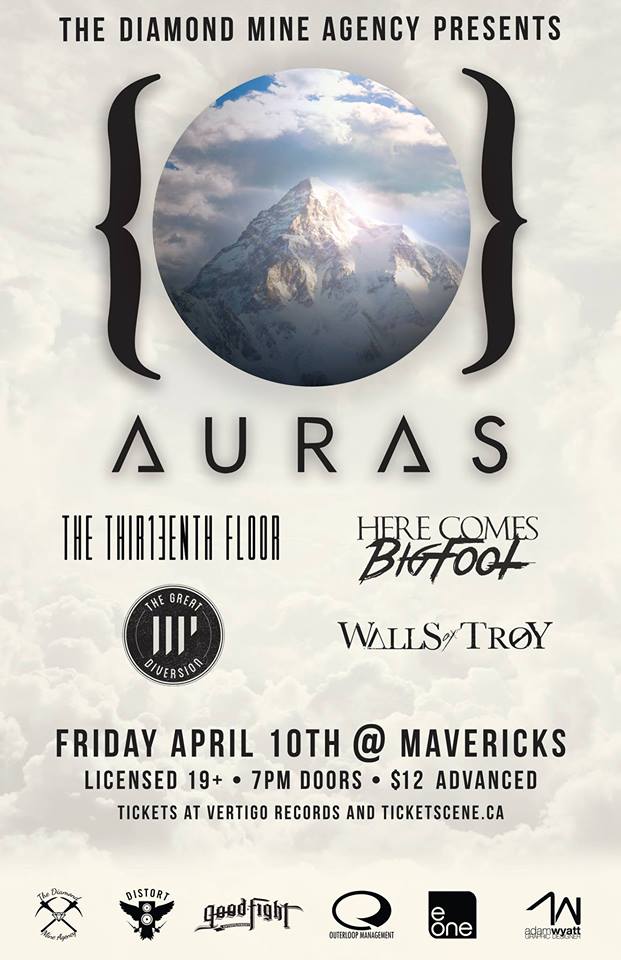 If you’re into garage punk rock, you should make your way over to Gabba Hey at City Center this Friday night to check out the live all-ages show being presented there. On the menu, Lethbridge punk pop group Fist City will be performing live with Toronto pop rock band Tough Age, Toronto psych country group Milk Lines and Ottawa garage rock/grunge outfit Sailor Jupiter.

This Friday night at the Daily Grind, Family Industries, in partnership with DreamLoveGrow, is launching the Artist Series. The event format showcases the talents of one visual artist who chooses the type of music that they feel best matches their collection of art. A DJ spins the music of choice, which lead organizers to come up with the tagline, “See the music, hear the art.” This first edition will feature the work of Alexandre Aimee and the music selections of Scratchmarx. 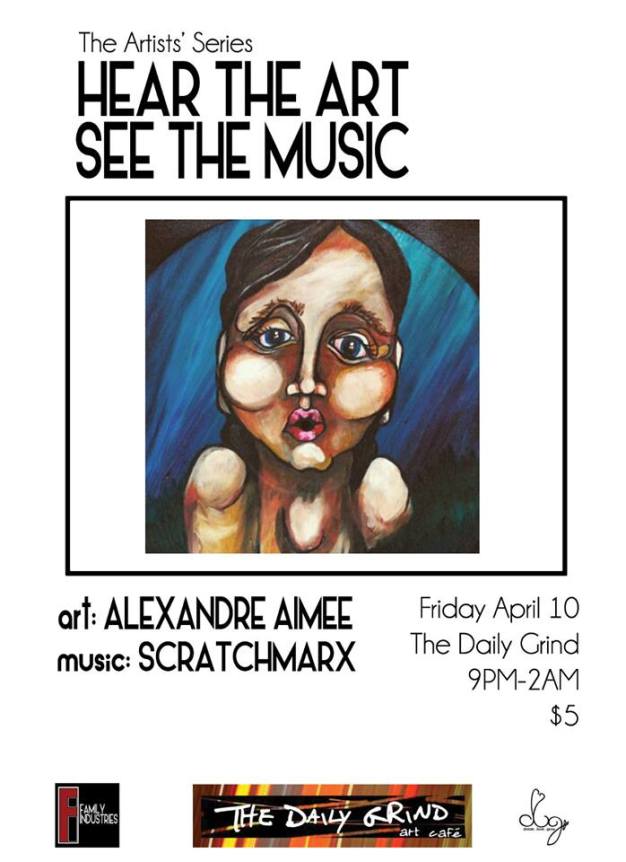 Peter Jackson will be making a stop in Ottawa this Friday night as part of the Since I was 16 Canadian Tour. The Canadian hip-hop artist will be performing at Ritual with his live band “The Nicks” and special guest SESE among several others.

Ever heard of Hervana? The all-girl Nirvana cover band from Toronto will be making a return to Ottawa this Friday night to give a show at House of Targ. This time around, the group will be joined on stage by Ottawa garage punk/rock group Kings Quest and Ottawa garage surf punk band Bonnie Doon.

Surfs up! Soda Shop is back at Mugshots to bring you King of the Beach. DJs Gremmy & Ski Sheik will be providing Soda Shop classics along with the finest surf gems, girl group bubblegum and garage rock. For one night, an endless summer dance party in your hearts and minds.

For the metal heads out there, there will be a show at Cafe Dekcuf this Saturday, April 11 featuring live sets by Lose Angeles metal band Phinehas, Gatineau melodic trance metal group Greta Knights, Ottawa metalcore formation Violent Tides, Cornwall metal project Through Lucid Eyes and Gatineau metal band Accretion (which seems to be performing every other week or so lately).

If you’re looking for an intimate night of stripped down songs this Saturday, head over to Raw Sugar Cafe in Chinatown to see local indie folk duo Gold & Marrow (previously Shannon Rose & The Thorn) perform live. The musicians and lovers will be sharing the stage with Toronto’s The Oxford Wild.

The radical, community-oriented, gender-bending, bike-loving, enviro-humping, queer-diggin, slow-dancing, big dress-wearing affair that is Promdemonium is back this Saturday, April 11. The 7th edition of this unique annual fundraiser, happening once again at the Glebe Community Centre, will feature music by DJs D-luxx Brown, Magnificent and . Space prom wear is mandatory!

Over at the Blacksheep Inn in Wakefield this Saturday evening, there will be a live show featuring Ottawa indie synth-rock nine-piece Loon Choir. The local band will be sharing the stage with Toronto-based indie folk/rock group Beams and Ottawa acoustic musician and singer-songwriter Leonard Youngfoot for the occasion.

CHUO 89.1 FM, CKCU 93.1 FM & Birdman Sound present the 12th Ottawa Community Record Show this Sunday, April 12 at St. Anthony’s Hall. This is the place to go to find LPs & CDs and dig for rare music gems from every genre. A must for music collectors!

Eventful Capital’s Weekly Picks: From The Mounties and DJ Spinna to The Underachievers and the 10th Ottawa Community Record Show

With the Ottawa Bluesfest lineup revealed last week, how excited are you for summer days and festival season? The 20th anniversary lineup has something for everyone and there’s definitely lots to look forward to! In the meantime, here’s another round-up of noteworthy events happening in and around the National Capital Region this week. Take a look at Eventful Capital’s weekly picks for a glimpse of what’s happening in Ottawa-Gatineau in the days ahead.

The Fau Mardi collective has released its schedule for the month of April. The weekly gathering, which happens every Tuesday at the Petit Chicago in Hull, gives a platform to local audio-visual artists in an effort to support the Ottawa Gatineau electronic culture. This week, the Fau Crew will be bidding farewell to one of its own, Racine.

The Mounties, made up of Hawksley Workman, Steve Bays of Hot Hot Heat, and Ryan Dahle of Limblifter/Age Of Electric, will be performing live at Mavericks this Wednesday, April 2. The talented trio, who’ll be in Ottawa as part of their first Canadian tour, will be joined on stage by Vancouver indie-pop band The Zolas and Vancouver guitar-pop musician James Younger.

This Friday, April 4, local artist Catriona Sturton will be performing live at Raw Sugar Cafe. The Ottawa-based singer, songwriter and multi-instrumentalist will be accompanied by special guest John-Alan Slatcha and others for the occasion.

Toronto indie-folk five-piece The Wooden Sky will be live at Ritual this Friday, April 4. The Ontario boys, who’ve performed in Ottawa many a times over the past years, will be supported by Toronto indie group Dusted and Toronto indie-folk band The Wilderness of Manitoba.

The April edition of Hip Hop Karaoke is happening this Friday, April 4 at Ritual with hosts DJ So Nice and Atherton. If you want to perform aka get on stage and impersonate your favourite rapper by doing that track you spent hours memorizing in front of the mirror, or if you just want to support as a member of the audience, click below for everything you need to know.

The monthly edition of Frenzy is going down at Babylon this Friday, April 4. The last Frenzy instalments have been crazy fun dance parties featuring some of the best upcoming and established music producers out there. This time around will be no different as Straight Goods brings you rising NYC producer Branchez. As per usual, local DJs Iggy Smalls and Foster will warm up the dancefloor for the up and coming American producer.

Ottawa’s first annual Capital Burlesque Expo, taking place from April 4 to 6, will bring together a roster of burlesque and variety performers from far and wide to celebrate the art of the strip tease. The expo will present a mix of golden era burlesque and modern performances and include interactive workshops, vendors, and plenty of shows.

The radical, community-oriented, gender-bending, bike-loving, enviro-humping, queer-diggin, slow-dancing, big dress-wearing affair that is Promdemonium is back this Saturday, April 5.The 6th edition of this unique annual fundraiser, happening at the Glebe Community Centre, will feature music by DJs D-luxx Brown, Magnificent and J-Fun. Prom wear is mandatory!

Over in Wakefield this Saturday, singer-songwriter Lauren Bourque presents the launch of his sophomore record Pieces of Your Past. The album release party, happening at the Blacksheep Inn, will feature new material by Bourque and an opening set by Toronto folk noir musician Rob Moir.

Experimental electronica duo André et Michèle invite you to join them for the release party of their debut album Different Positions happening at Raw Sugar Cafe this Saturday, April 5. To celebrate the launch, the local artists will be performing the album live and all attendees will receive a complimentary CD copy of the album.

Brooklyn duo The Underachievers, made up of members Issa Dash and AK, will be performing live at Ritual this Saturday night as part of the Eyes of the World Tour. The Beast Coast rappers, who are affiliated to the Pro Era crew, will be giving their second Ottawa show alongside Denzel Curry and Dillon Cooper.

CHUO 89.1 FM, CKCU 93.1 FM & Birdman Sound present the 10th Ottawa Community Record Show this Sunday, April 6th at St. Anthony’s Hall. This is the place to be to find LPs & CDs and dig for rare music gems from every genre. DJs Billy from Hot Butter & Bank St. Bounce will also be rocking the ones and twos for the occasion.