Eventful Capital’s Weekly Picks: From Bears of Legend and TIMEKODE to Slo’ Tom and Bangers & Mash

This Tuesday, March 14, the Carleton University Art Gallery invites you to a free exhibition walk-through and talk by Making Radio Space in 1930s curators Michael Windover and Anne MacLennan. Presenting a look at the visual and material culture of radio in 1930s Canada, this special exhibition offers a new way of thinking about a medium closely associated with 20th century modernity.

It’s the Ontario March Break and a lot of people are off this week looking for family friendly activities to enjoy. House of Targ is extending its hours this Wednesday, March 15 and putting on a pinball party for families. Games galore!

This March 15 for the International Day Against Policy Brutality, check out Beats Beat The Police,  a free hip-hop show and panel discussion on ending the violence of policing. The event will feature the spoken word poet Philoso-fire, and hip-hop artists Hyfidelik, JustJamaal and Cannon2x from Missing Linx, as well as Frank Blak and Shariq Devonte. A free feast will also be available.

This Wednesday, March 15, Art-Is-In is holding its 3rd Latte Art Throwdown. Come watch and support the top 24 baristas in the city as they battle for the number 1 spot. A night of fun with coffee, cold drinks and entertainment, including music provided by DJ Zattar.

Ottawa indie pop/rock/punk project Micarza Camaro will be doing a live set at Bar Robo this Thursday, March 16 and for the occasion Ottawa pop/folk/punk singer-songwriter Chris Page will also be performing.

This Thursday, March 16 at the Canadian Museum of History, set sail on the high seas with the unique folk ensemble, Bears of legend, as they perform songs from their new album, Ghostwritten Chronicles. The show is presented at the Museum in partnership with the city of Gatineau.

Laval, Quebec’s Petunia will be making a stop in Ottawa this Friday night as part of his 2017 Ontario & Quebec Winter Tour. For the occasion, the infectious hillbilly singer will be sharing the stage with Ottawa-based soulful, country, roots, singer-songwriter Julie Corrigan.

TIMEKODE, Ottawa’s longest-running monthly dance party is back at it this Friday night inside D’Afrique. The popular funk, soul and hip hop dance party that has been keeping Ottawa funky fresh for 12-years strong will once again be held down by resident DJs Zattar and Memetic. Get your dancing shoes ready and see you on the TK dance floor! 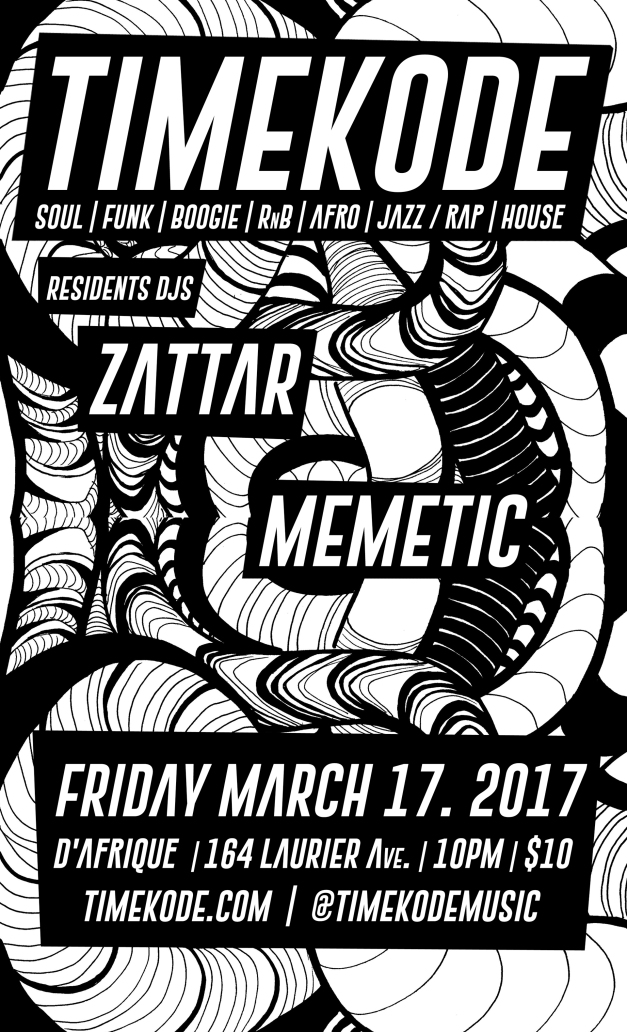 Ottawa’s first soul music festival, Bangers and Mash is happening this Saturday, March 18 at House of Targ and Blacksquirrel Books. Pass holders will be able to go back and forth between the two venues to catch 8 bands and 4 DJs during 5 hours of live music. Performers include the Mackenzie Rhythm Section, Slack Bridges, The Hornettes, DJ Zattar, and DJ Magnificent among others.

Do you have cabin fever? This Saturday in Orleans, beat the winter blues with a family-friendly fete featuring some of Ottawa’s best DJs heating up the dance floor, hot chocolate, tropical drinks, tasty Caribbean eats as well as a domino tournament, a kids corner and a DJ workshop.

The official Cabin Fever after party is going down at Kinki Lounge this Saturday night and it’s a pyjama themed Jammy Jam. So wear your most comfy pair of joggers and hoodie or your coziest onesie and get ready to dance it up with DJs Kam, Mace, Kane and more.

This Saturday, March 18 at the Centrepointe Theatre, local Muslim women musicians will share original and traditional songs from various different music styles sharing a spiritual thread. This event is being presented with the support of Ottawa 2017, the JUNO Host Committee and the Ottawa Music Industry Coalition.

This Saturday at the Petit Chicago, warm up to the reggae sounds of Nile Groove. The local roots/reggae/r&b band is sure to make you move and heat up the dance floor.

If you’re a fan of country, you should check out Slo’ Tom & The Handsome Devils at Irene’s this Saturday night. The local country band will be playing alongside their friends The Whirleygigs and special guests Hundred Pacers will also be joining them on stage.

The Homesick emo night is back at Cafe Dekcuf this Saturday, March 18 and the party originally from Toronto has announced that it’ll now host a monthly night in Ottawa. So get that Silverstein sweater out and come warm up with the emo kids during a night of nostalgia and teen angst.

If you’re looking to boogie down to disco this weekend, head over to the Mercury Lounge this Saturday night for the Disco Lab party featuring mad scientists Trevor Walker and Michael Caffrey who’ll be taking care of the beats. If you attend, you’re encouraged to dress in your best 80s look to get in for free.