When I created Eventful Capital in November 2011, I essentially had one objective in mind: to help change the way people perceive the National Capital Region. It was important for me to let the world know that fun things abound around here and that exciting stuff happens on the regular in our nation’s capital. I wanted to create a simple tool that people could turn to, to find out about the numerous events being held in and around Ottawa-Gatineau. I hoped this blog could act as a reliable source of information and paint an accurate picture of the local cultural scene. Five years deep, I thought I’d look back and reflect on the then and now.

Looking back, I can’t help but feel sad and nostalgic when I think of the various venues that we’ve had to say goodbye to through the years. Places like Mugshots, Raw Sugar Cafe, the Daily Grind, and Ritual (RIP) come to mind. These cherished culture hubs were gathering places for those who support local arts and certainly played an instrumental role in helping our city’s scene grow. They are truly missed and I’ll always have fond memories of the times I spent there. Thankfully, the gaps they left were filled by new welcomed venues like Bar Robo, Live on Elgin, House of Targ, Le Temporaire and the Minotaure who host a variety of events on a weekly basis, supporting musicians and visual artists alike.

There have been some milestone anniversaries as well, for example the legendary Mercury Lounge, which just turned 20 years old, Bluesfest, which also marked its 20th anniversary in 2014, and the Timekode movement, that just celebrated 11 years of soul moving soles.

Ottawa-Gatineau being the capital of festivals, you’d think there are enough existing ones already. Yet, they keep popping up left and right to the delight of festival-goers. I’m thinking Arboretum, Glowfair, Megaphono, the Ottawa Grassroots Festival and Marvest, among others.

There has also been more and more municipal support for culture and arts initiatives (the #OttMusik program for example), which is generally encouraging and certainly appreciated by our community.

It also wouldn’t be right to publish this post without giving a big shout-out to all the other blogs and influencers, who, like Eventful Capital, work towards supporting the Ottawa-Gatineau artistic scene. I see you Ottawa Showbox, Couch Assassin, Apt613, Sous-Sol 819, Spotlight Ottawa, Sometimes Always, our community radio stations CKCU, CHUO and RÉÉL-Radio. Thank you, for doing what you do, your work is truly important and our community needs you.

At times, I’ve asked myself why I bother with this blog, wondering if it’s really worth all the time, energy and effort I pour into it week after week. And then, I remember all of the emails I receive from artists, movers and shakers who call on my help to spread the good word, and all of the wonderful people I have met along the way who make this place so special, and I shake that feeling off because in the end, I know that if I’ve helped just a handful of people fall in love with our nation’s capital, I’ve done my part, and that’s all that matters.

And what have I learned over the course of the past five years? I’ve learned that working together and helping each other out makes us stronger, and that we have a better scene for it. So thank you, lovely people of Ottawa-Gatineau who believe in our local cultural scene and support it in one way or another. Let’s keep building this great little region of ours. Here’s to another five! *heart emoji*

The sun is shining and Spring has finally settled in. With that, there’s no lack of things happening this week in the National Capital so wether you’re looking for an album release, a dance party, a concert or a comedy show, Eventful Capital’s got you covered. Check out this week’s picks below for a selection of noteworthy events happening around Ottawa-Gatineau in the days ahead.

This Monday, April 20, the Rap Round Robin Tour will be making a stop at Ritual. The unique hip-hop event will consist of three touring groups and three locals performing one track per round on three stages set up around the room. The audience will be taking the action in from the middle and there will basically be non-stop action.

The Spring edition of the Ottawa Zine Off is happening this Tuesday evening at Pressed. Here’s how it works: make a zine, bring (photo)copies to trade with others on April 21, meet other interesting people and have fun. You don’t have to make a zine to participate, but wouldn’t it be boring if you didn’t? Oh and zines are like mini DIY magazines reproduced in small quantities in which you can share stories, drawings, information, or whatever else. Be creative!

This Thursday evening, Studio Sixty Six presents a talk by artist Ruth Steinberg. As part of this presentation, the visual artist will be discussing her inspiration and motivations as well as her process in creating “What the Body Remembers”, an ongoing series of nudes of women aged 55 years and older. 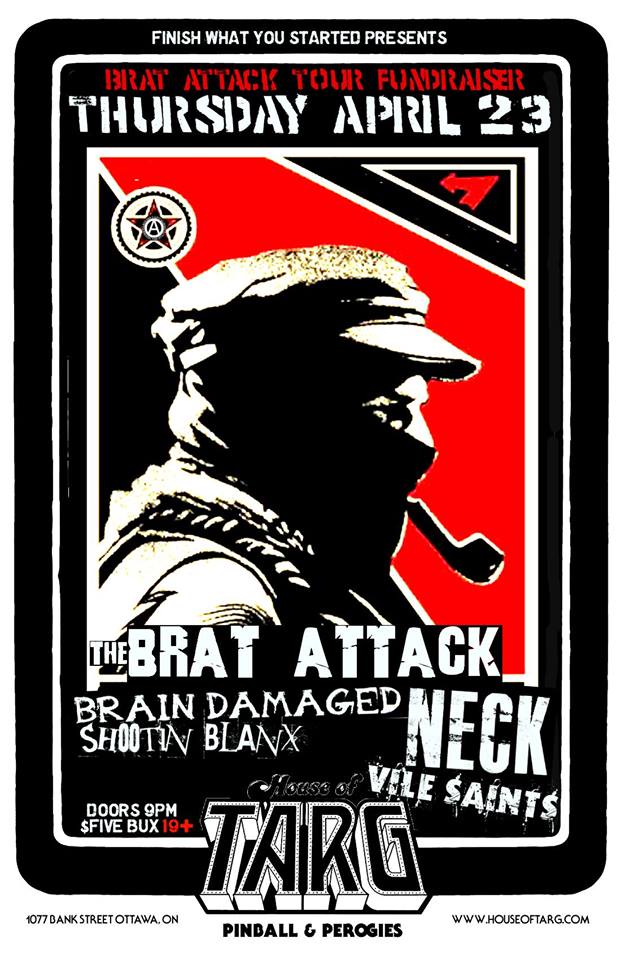 This Thursday night, Undisposable and Nrml present Skkrt Skkrt at Babylon. For the occasion, Russian Producer/DJ Cyber 69, Toronto DJ/Event Coordinator Happy Boy Tona, Comedown Teo Nio and Abele will be live as well as VNCHY & Foster representing Ottawa. To top it off, Toronto Grillz will be present if anyone wants to get grilled up and icy. 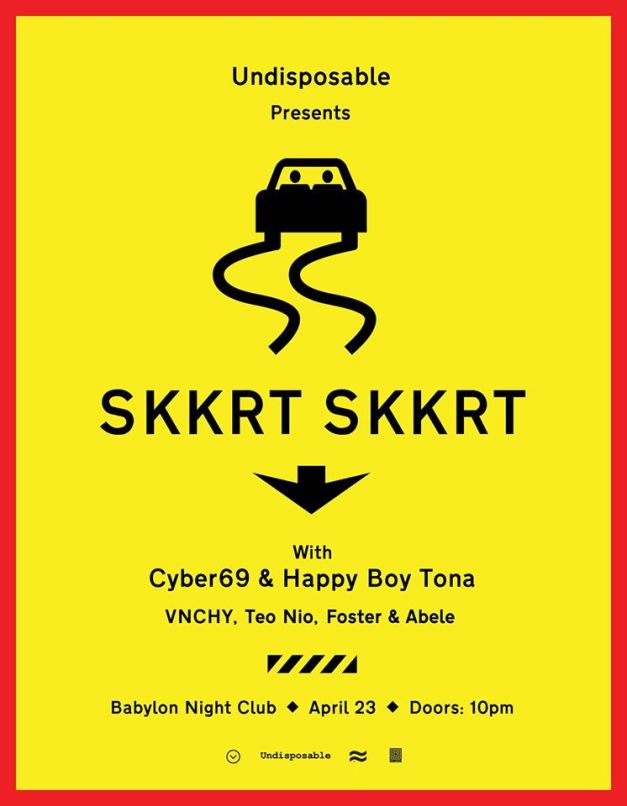 The 4th annual Ottawa Grassroots Festival is being held from this Thursday, April 23 to this Sunday, April 26 at the Montgomery Legion. For this edition, the programming includes performances by headliners Old Man Luedecke, Connie Kaldor, Stef Paquette, and Eric Dubeau among several others as well as workshops, jam sessions, choirs a KidsZone and more. 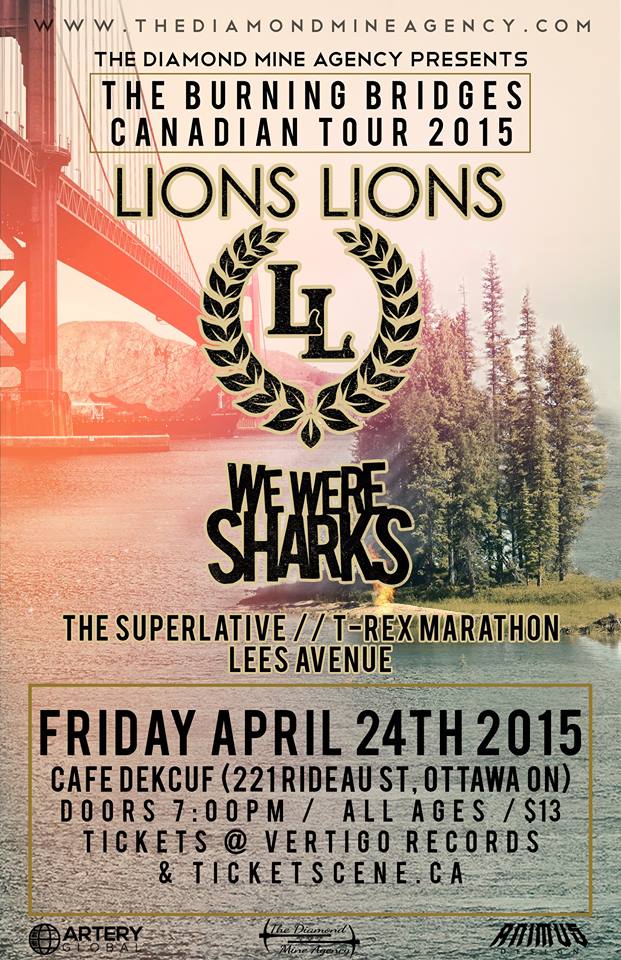 If you enjoy contemporary improv jazz, be sure to make your way over to Black Squirrel Books this Friday night to attend The Craig Pedersen Quartet’s “Ghost” CD Release. The album launch show will feature a live performance by the Montreal band which includes musicians Craig Pedersen, Linsey Wellman, Joel Kerr and Eric Thibodeau. 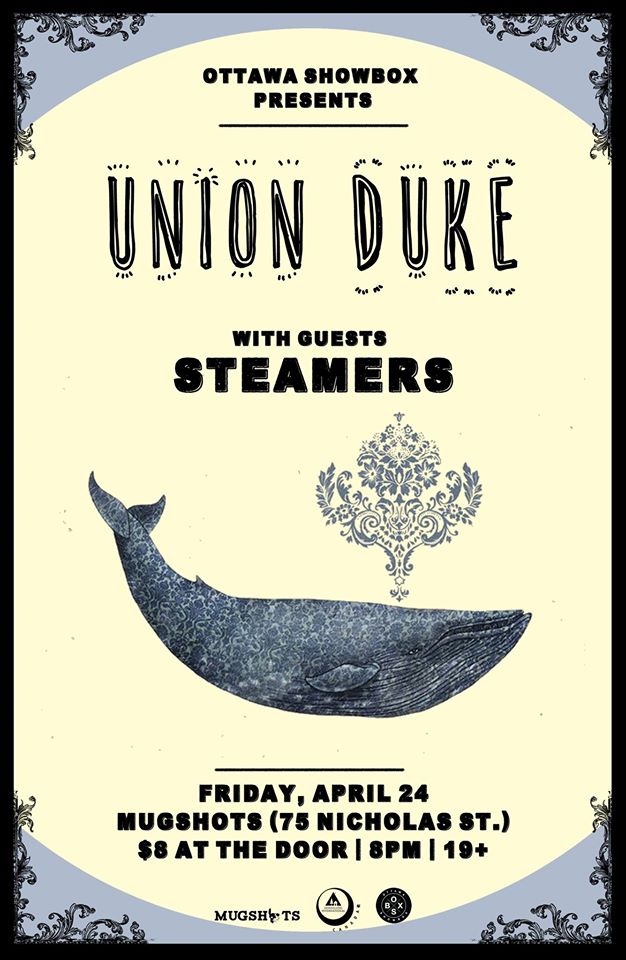 Darren Frost, one of the funniest and most controversial comedians in the country, will be in Ottawa as part of his “The Darkness Within” Tour from Thursday, April 23 to Sunday, April 26. If you enjoy boundary-pushing comedy, be sure to head to Yuk Yuk’s on one of those nights to catch Frost’s set live.

If you’re a fan of rock n’ roll, blues and soul, you may want to go to the Brass Monkey this Friday night for She Rock Part 2, a live show featuring Rock, Stock and Barrel, Bella Cat, and Rosie Future & the Thorns. 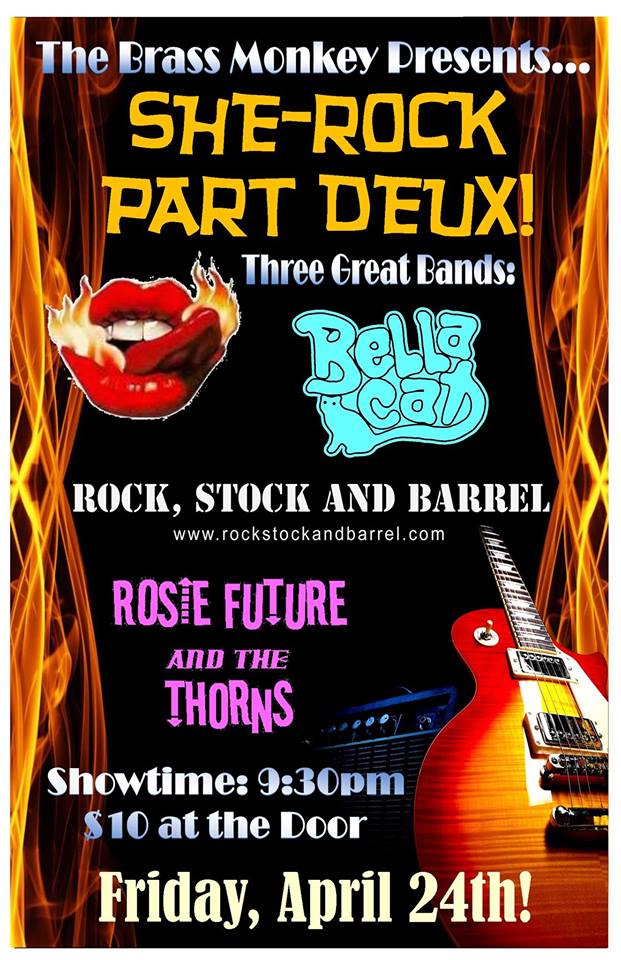 Double Barrel, one of Ottawa’s most popular monthly dance parties, is going down inside the newly-renovated Mercury Lounge this Friday night. Resident DJ Magnificent will be gracing the wheels of steel as per usual and this time around he’ll be joined by special guest DJ Mr. Michael Caffrey. A funk, soul, Motown and vintage reggae dance party you don’t want to miss! 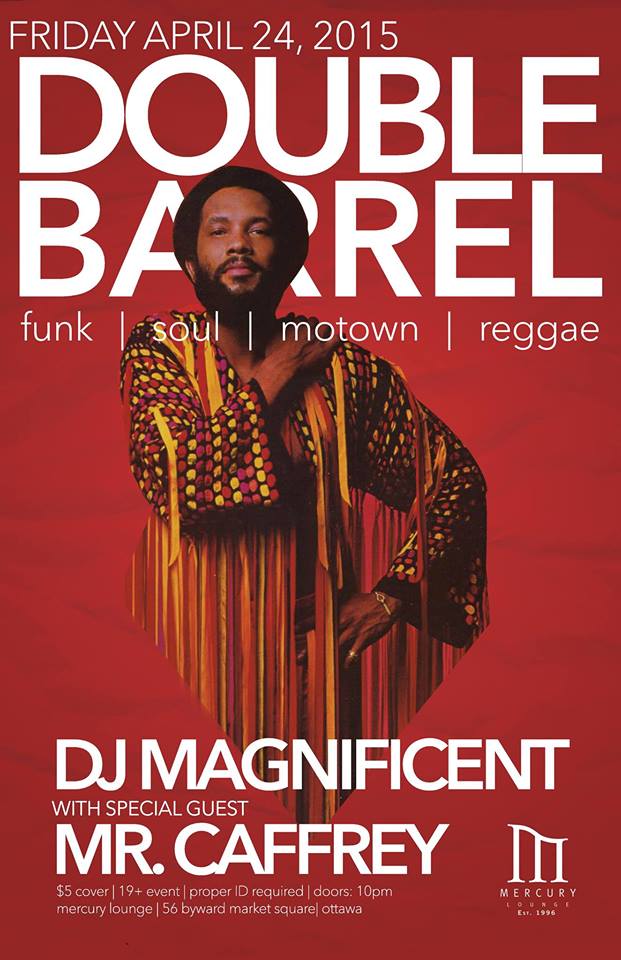 If you’re in the mood to check out some folk music on Friday night, House of Targ has got the perfect show for you. Starting at around 10pm, Philadelphia folk/rock musician Dave Hause will be giving a live set and he’ll be sharing the stage with two talented local special guests: Ottawa indie/folk singer-songwriter Kalle Mattson and Ottawa folk singer and guitar player Cory Levesque.

Party Pack is going down over at Multi Social Room this Friday night, and this time around the monthly party will feature a live set by guest DJ/Producer Promnite from L.A. As per usual, residents Laocapone and Foster will be there to warm up the party.

This Friday night Dub Invasion presents the High on Beats crew live at Cafe Dekcuf. The Montreal-based collective will be representing in full force in Ottawa as part of the monthly bass night. Giving live sets will be Construct, Living Stone, and Mr.TheCat.

Toronto alternative rock band Die Mannequin will be giving a live show at Mavericks this Saturday, April 25. As part of the concert, the 4-piece, who’s been around since 2005, will be performing alongside Toronto/Calgary alternative rock group Secret Broadcast and Perth hard rock outfit Fools Like You. 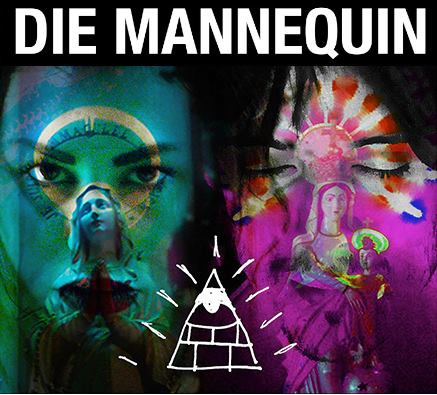 R.A.P.S.Ody is Ottawa’s new monthly event where urban artists come together to compete in a classic “cypher” hip hop format meant to be inclusive and open to all. Happening this Saturday evening, the third edition will feature spoken word artists, rappers, dancers, beatboxers, singers and a live performance by special guest Gutta King Chris of Ottawa.

For the metal heads who want to headbang this Saturday, be sure to go to Dekcuf. There you’ll get a chane to catch Ottawa death metal group Accursed Creation who’ll be promoting their EP “Hugh Your Mother, Feed Your Dog”,  Montreal thrash metal band MUTANK, 2014 winners of Wacken METAL Battle Canada, who are returning to the national capital, Ottawa thrash metal band Volatile who will make sure everyone is awake and, Ottawa metal band SludgeHammer who’ll be promoting their EP “Organ Harvester” to open the show.

If you’re looking for something more mellow for your Saturday night, Halifax folk-pop musician Gabrielle Papillon will be giving a live intimate performance at the lovely Raw Sugar Cafe alongside special guest Pina, an Ottawa-based folk singer-songwriter and guitar player.

This Saturday at House of Targ there will be a rare performance by psychobilly and garage/blues musician Bloodshot Bill, the self-proclaimed greasy Canadian legendary one man show that’s got it all. The singer and guitar player will be joined by special guests Bearshark, a loud delta rock duo from Ottawa.

Fever, the only disco dance party of its kind in Ottawa, is going down at Babylon this Saturday, April 25. The monthly night promises all the glitz and glam of the 70s & 80s and tons of disco hits and more modern tunes provided by resident DJ Illo. An awesome way to dance the night away! 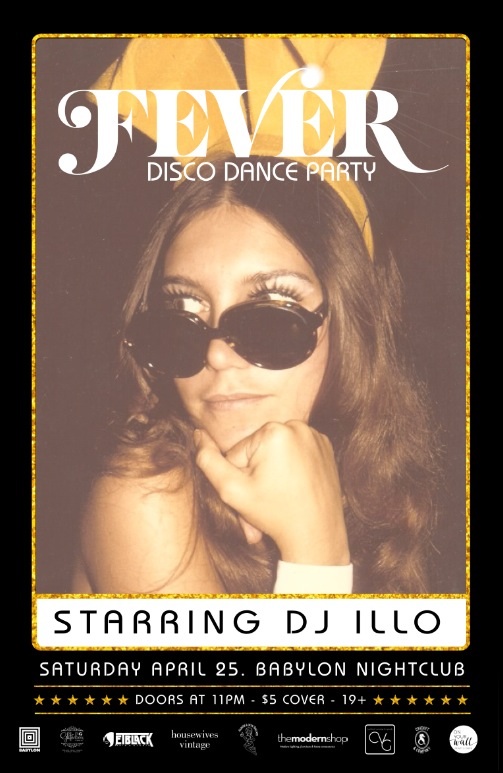