Eventful Capital’s Weekly Picks: From Jill Barber and The Acorn to Alaclair Ensemble and Dragonette

This Wednesday, November 9, the Ottawa Jazz Festival is presenting a special fall event showcasing Jill Barber in concert. The two-time JUNO nominee singer-songwriter will be performing live at Southminster United Church in Aylmer and all profits raised form the show will go to supporting the upcoming 2017 Ottawa Jazz Festival.

For the first time, the Celebrity Marauders are bringing the party to Ottawa this Wednesday night. The guys are bringing that house party vibe to Kinki and it’s bound to be one for the books. Music from all eras & genres courtesy of DJs Kardinal Offishall, Scratch, Mace and several others. A guaranteed good time!

SoCal punks Face to Face will be hitting up the Bronson Centre this Thursday, November 10 and for the occasion they’ll be performing live with Ottawa punk/metal band Crusades, and Ottawa punks The Valveenus.

Edmonton folk/punks Audio/Rocketry are playing live at Bar Robo this Thursday night as part of their 2016 Tour. The band will be sharing the stage with Ottawa folk/punks Jonathan Becker & The North Fields and Ottawa folk/punk musician Jon Creeden.

Ottawa valley indie rock/soul band The Acorn will be playing live at Babylon this Thursday night and this time around these local faves will be joined on stage by Toronto power pop/rock musician Taylor Knox and Ottawa experimental pop project Trails.

The Ottawa-Gatineau tattoo expo is back for the 8th year in a row and this time it’s being held from November 11 to 13 at the Hilton Lac-Leamy in the Hull sector of Gatineau. Dubbed “Gathering Of The Titans”, this edition will feature live performances and novelty acts, side show entertainment, burlesque as well as a bunch of tattoo artists and vendors.

The metal heads who are looking for a show to check out this week should head over to Mavericks this Friday to catch Swedish melodic death metal legends Dark Tranquillity as well as Finnish doom metal band Swallow the Sun, Swedish thrash metal group Enforcer and American metal outfit Starkill.

Welland indie/folk/country musician Spencer Burton is bringing his The One Before The Next One Fall Tour to Ottawa this Friday night. He’ll be playing live at Bar Robo alongside Ottawa indie folk singer-songwriter André M. Bluteau, who hasn’t performed live in a while and who recently came out with a new album, so it’s sure to be a real treat.

This Friday night, Ottawa hip hop artist DRAE invites you to join him for his E/scape album release show happening at the Mercury Lounge. For the occasion, the Ottawa rapper be joined by special guests FTRSL, Yusso and Aron The Alien. Support local hip hop ♥

The 12th Annual Remembrance Day Canadian Legion Benefit Show will be held at the Dominion Tavern this Friday, November 11 with live performances by In Heat, Ape City, A Staggering Pace, and Sons of Scotland . As always, proceeds raised from the event go to helping veterans in need along with their families. 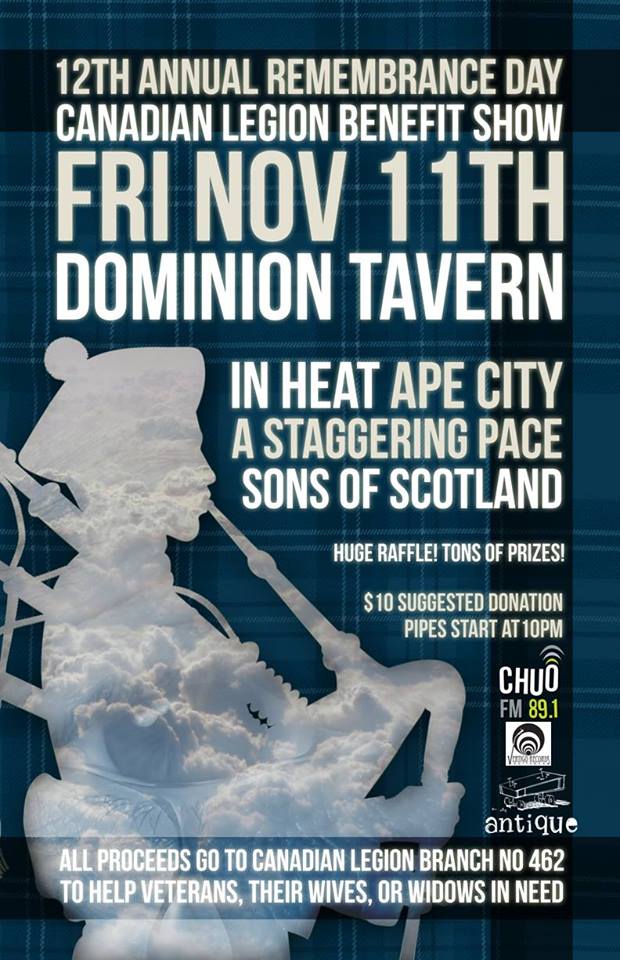 It’s hard to believe it’s already been a year (!): Kinki After Dark Fridays are celebrating their 1st birthday this November 11 with a party that’ll feature a set by special guest DJ Jayemkayem who’ll be down from Toronto, as well as resident DJs Mace, RayRay, and Eazy El Dee. Come celebrate the one-year anniversary and congratulate the crew behind the successful After Dark Series.

Electronic music lovers will want to hit up City this Friday night to catch a rare Ottawa appearance by Amsterdam DJ/Producer Technasia. The Parisian-born beat-maker will be joined by DJs Shalbeats, Saa Andjelic and Aga.

Quebec rap super group Alaclair Ensemble will be back in Gatineau this Saturday, November 12 to kick off L’Osstidtour in an effort to promote their latest album Les Frères  Cueilleurs that came out this past September. The collective who seems to only be getting more and more recognition and support will be sharing the stage with Ste-Eustache rapper Koriass and Montreal hip hop newcomers Brown, who’ll be in the region for the very first time. It’s going to be epic, no doubt.

Toronto pop band Dragonette is currently on tour and making a return to the national capital this Saturday night in support of their brand new album Royal Blues that’s out November 11. The Universal Records signees will be sharing the stage with Toronto/London dance pop artist Lowell.

This Saturday night at Mavericks, it’s the third instalment of Capital Punishment, which will showcase some of the best battle rappers in the country. Capital Punishment will be an epic night featuring seven rap battles with two main events that have the potential to be classics. There will also be live performances and special guests.

Over at Bar Robo this Saturday night, there’s an all-vinyl party dubbed Get On Up. DJ Breakthru will be spinning a mix of funk, soul, rock, Motown, hip hop, disco and whatever makes you move and groove.

Ottawa swamp roots rock band MonkeyJunk will be celebrating the release of their fifth album Time To Roll with not one but two hometown release shows happening at the Rainbow Bistro. The first show will be held on Saturday night and the other one is this Sunday afternoon at 4 p.m. It’s always a fun time with this trio of talented musicians!

Members of local activist and artist collective Babely Shades are having an art show at Pressed Cafe and the vernissage is being held this Sunday evening. If you can’t go to the launch, but want to check out the show, the artworks will be up until the end of December.

Fans of EDM will want to head over to Barrymores this Sunday, November 13 for The Journey Tour, which will feature live sets by DJ/Producer Seven Lions as well as Grum and Unlike Pluto.

Eventful Capital’s Weekly Picks: From Solids and the Tattoo Expo to BadBadNotGood and the Souljazz Orchestra

Another blog post, another week filled with music shows, art exhibitions, dance parties and events of all kinds taking place in and around Ottawa-Gatineau. As usual, there’s no shortage of fun things happening in our capital city so wether you’re into visual arts, live music, dance parties, or craft shows, there’s sure to be something to quench your event-going thirst. Take a look at Eventful Capital’s weekly picks below to help plan the days ahead.

If you feel like starting the week off with some indie punk rock, make your way over to House of Targ this Tuesday night to catch NYC indie rock band Dirty Dishes, Ottawa spooky beach punks Bonnie Doon and Connecticut indie rockers Stove. If you don’t work on Wednesday, even better right?

At the Ottawa Shaw Centre from November 11 to the 15, check out the Signatures Show featuring over 180 of Canada’s most talented artists, artisans, and designers. With an array of quality Canadian handcrafted products available, including fashion, home décor, natural body care, fine art, stunning jewellery, and specialty foods, it’s definitely worth attending and a perfect place to get some holiday shopping done. 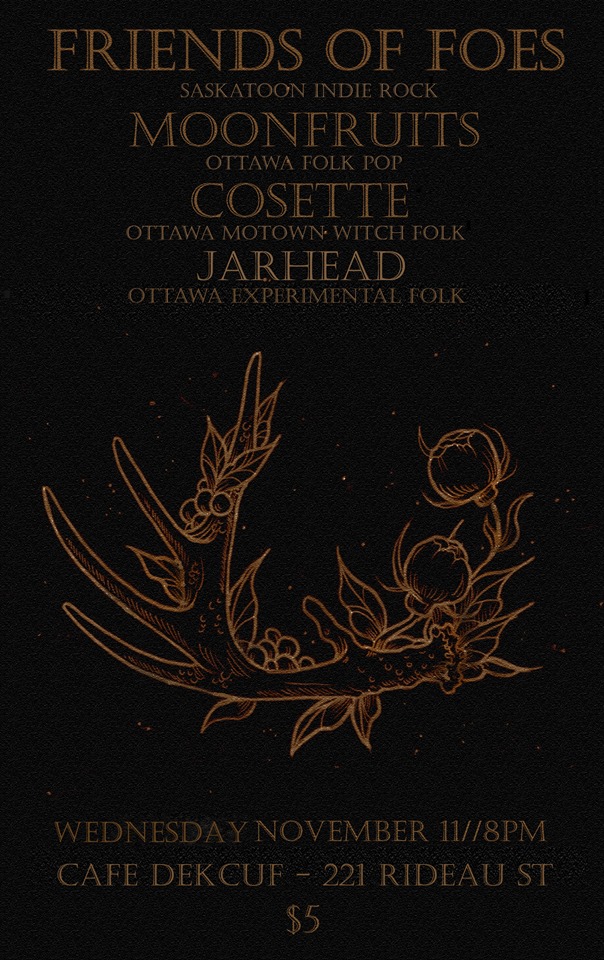 Montreal punk/rock/grunge duo Solids will be returning to House of Targ this Thursday night after their last performance in Ottawa which dates to December 2014. The guys will be sharing the stage with Montreal hardcore/punk band Wild Moth and Ottawa math-rock/post-punk project Heavy Traffic. Having seen Solids perform twice already, I can attest to the fact that these guys rock hard and give a solid set, no pun intended.

The Ottawa-Gatineau tattoo expo is back for the 7th year in a row and this year it’s being held from November 13 to the 15 at the Casino Lac-Leamy in the Hull sector of Gatineau. Dubbed “Clash Of The Titans”, this edition will feature a guest appearance by Hollywood actor Robert Lasardo, a live performance and novelty acts by Matt Gone, side show entertainment by Ses Carny, The Royals burlesque crew as well as a bunch of tattoo artists and vendors.

Ottawa metal band Antlion invites you to join them for their “The Prescient” album release party happening this Friday, November 13 at Cafe Dekcuf. For the occasion, they’ll be performing live alongside local metal bands From The Deep, Dissentient, and Fumigation.

Toronto-based alternative pop rock multi-instrumentalist Hawksley Workman, who was last here to perform at this past summer’s Bluesfest, will be making a return to Ottawa this Friday night as part of his Winter Bird Tour. This time around, he’ll be sharing the Bronson Centre stage with London folk-pop artist Fiona Bevan.

If you’re looking for something more intimate to kick off your weekend, Live on Elgin is a great place to hit up. This Friday night, there’s going to be some live performances by local acts namely melodic garage punk/rock trio Ornaments, acoustic punk/rock musician Ryan Fritz, indie, rock/americana/folk/blues artist Josh Charbot and Ottawa rock band Nebraska.

Also this Friday, November 13, Ottawa power pop rockers No Fly List return to the stage at Irene’s Pub to release the first half of their long-awaited double-EP entitled Both Sides. The Both Sides project represents the culmination of 4 years of recording and road-testing material across eastern Ontario. To mark the occasion, No Fly List will be joined by Ottawa indie rock band High Waters. This event is part of CKCU FM’s 40th anniversary celebrations.

The Grillz & Glam monthly party is celebrating 5 years of debauchery this Friday night over at Babylon. This special anniversary edition will feature special guest DJs Tom Wrecks and Tech Twelve of Toronto as well as local fave Illo on the 1s and 2s.

This Saturday, November 14, Cloud City will be releasing their self-titled debut album at the Mercury Lounge. Cloud City is an Ottawa-based instrumental band that combine elements of progressive funk/fusion, soul, groove, blues, indie rock, hip-hop, afro-beat, and electronica. Stick around after the show for some dancing to DJ Trevor Walker’s contagious sound selections.

Toronto-based experimental jazz/hip hop trio BADBADNOTGOOD will be giving a live show to support Centre 507 and the Artistic Expressions Studio this Saturday night at Centretown United Church. Having recently had more than 50% of their funding cut, this puts the centre in jeopardy and will force them to drastically scale back their programs, which have provided valuable drop-in services and a community for thousands of Ottawa’s homeless and disadvantaged for years. In addition to the show, there will be an art sale featuring the work of the Studio’s talented artists and Alan Neal of the CBC will be emceeing the event.

Local musician Vincent Bishop invites you to join him for the release of his debut album, “Out of the Dark” taking place this Saturday, November 14 at Cafe Dekcuf. Bishop, who’s style mixes elements of folk, reggae, rock, hip hop, celtic and pop, will be joined by the Harea Band for the occasion.

Ottawa stoner grunge band Mudpuppies will be performing live with Ottawa r&b/soul artist Shaz at Flapjack’s this Saturday night. Grab your friends and join them for a night of live music in support of the local scene.

The Lovely Haze will be back in Ottawa this Saturday night to launch their second album “Escape from the Dollhouse”. This time around, the Montreal garage punk/rock band will be performing live at Mavericks with Ottawa bands Muffler Crunch, Elementals, and Big Moan.

Hometown heroes The Souljazz Orchestra are performing live at the Petit Chicago this Saturday, November 14 as part of their Resistance International Album Release Tour. The Ottawa-based six-piece, known for its contagious soul, jazz and afro-latin sounds, will be joined by DJ Zattar on the wheels of steel. If you haven’t been to a Souljazz show before, you’re in for a treat, it’s always a guaranteed good time!