Eventful Capital’s Weekly Picks: From King Louie and Hip-Hop Karaoke to Structures and The Flatliners

Another week begins, and the Ottawa-Gatineau cultural scene shows no signs of slowing down. If you’re around in the coming days, check out the lineup of solid events happening in and around the National Capital Region and be sure to get out to enjoy some of them. Take a look at Eventful Capital’s weekly picks below to help organize your plans for the days ahead.

The Fau Mardi collective, which recently celebrated its 5th birthday, has released its programming for the month of December. The weekly night, which happens every Tuesday at the Petit Chicago over in Hull, gives a platform to local audio-visual artists in an effort to support the Ottawa Gatineau electronic scene. This week, the Fau Mardi crew is welcoming special guests Chris International, Jas Nasty and DJ Daisy for an all-vinyl set. 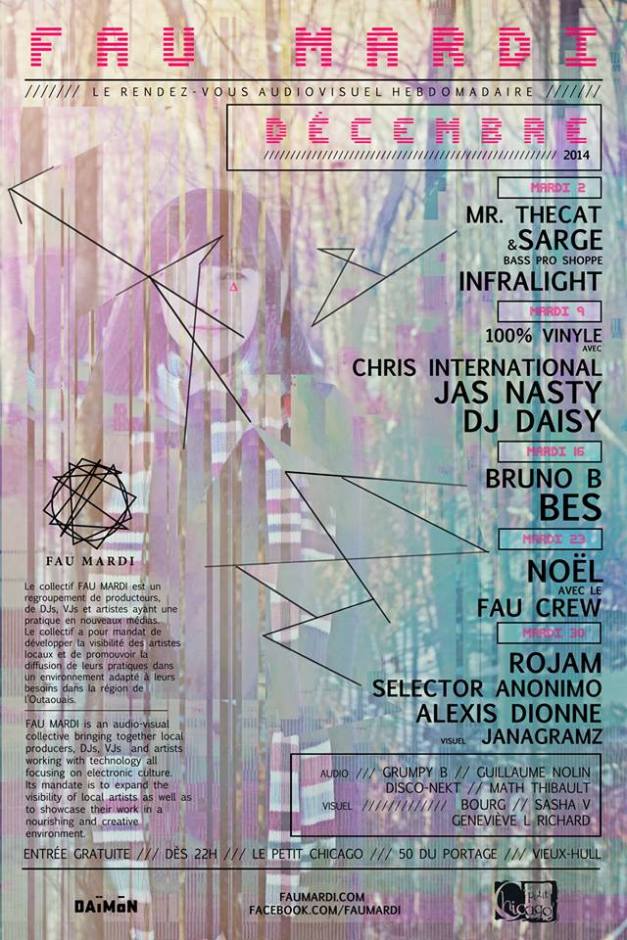 Local francophone wordsmith D-Track, who’s both a hip-hop artist and slam poet, will be officially launching his first spoken word EP this Tuesday, December 9 at the Cabaret La Basoche in the Aylmer sector of Gatineau. This is a free event, but to attend, guests must RSVP as space is limited. Details below.

Toronto metal/hardcore band Structures will be making a stop in Ottawa this Wednesday night as part of their Farewell Tour. The Sumerian Recs’ signees will be performing live at Ritual alongside Montreal/Ottawa metal/hardcore group Obey The Brave, Kitchener hardcore formation Exalt and Illinois metal band Villains.

After a short hiatus, the RADIOACTIVE music series is back and proud to present The PepTides Video Premiere for “Love Will Find You” this Thursday, December 11 at the newly-renovated Mercury Lounge. The event will feature a live performance by electro/synth pop outfit The PepTides as well as an opening set by Ottawa funk/soul r&b band Old Stereo. 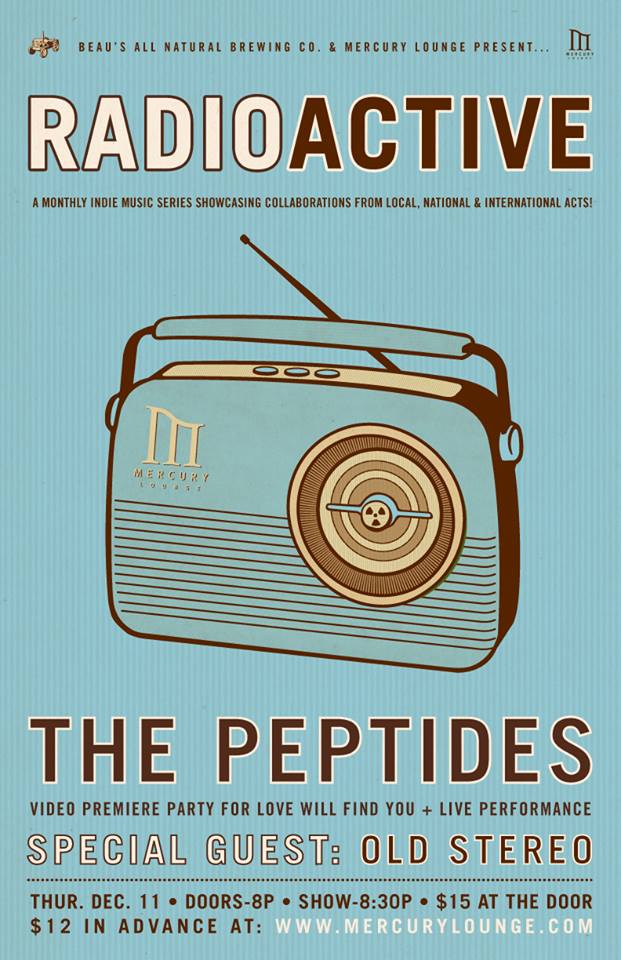 The December edition of Bumpin’ Binary is happening at the Mugshots Jailbar this Thursday, December 11. If you’re into swinging funky soul, r&b, blues and gospel, you’ll be served as Don Cummings and Mike Essoudry bring you a night of live music like no other. 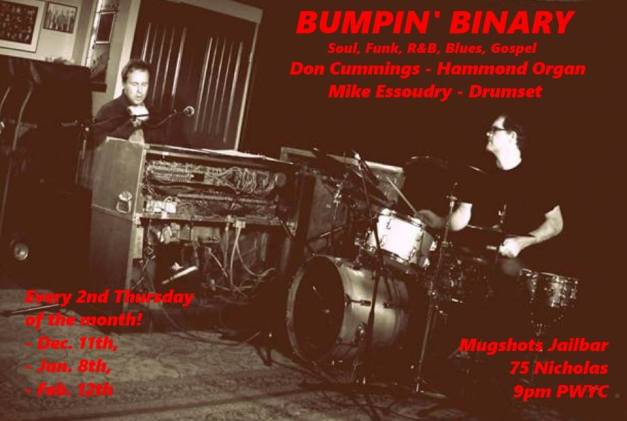 Wanna check out a rock n’ roll show and support a good cause at the same time? Head over to Zaphods this Friday, December 12 for the RocknRoll Benefit for The Snowsuit Fund. For the occasion, 4 local bands will share the stage to help raise much needed funds for this special project. Performing live will be Big Jeezus Truck, The Sick Sick Sicks, Sons of Scotland and Slo’ Tom and the Handsome Devils.

Montreal psychobilly/punk trio The Brains will be giving a live show at Cafe Dekcuf this Friday night in support of their latest EP “The Cover Up”. The guys will be back in Ottawa to perform alongside Montreal punk rockers East End Radicals, Ottawa folk punk band The Scally Cap Brats, and Ottawa horror rock outfit Patron Saint of Plagues.

If you’re looking for something more intimate, you might want to head over to Pressed Cafe this Friday night to see Toronto folk/rock/pop project Octoberman live. The collective will be giving a live set with Toronto lo-fi pop trio Culture Reject and Ottawa folk/pop singer-songwriter Andy Swan.

Chicago hip-hop artist King Louie aka King L will be live at Ritual this Friday, December 12. The Drill God, who’s been credited for making Chicago the hottest hip-hop scene in 2012, will be performing alongside local rappers Cashtro, Gutta King Chris, Kingscollege and more. 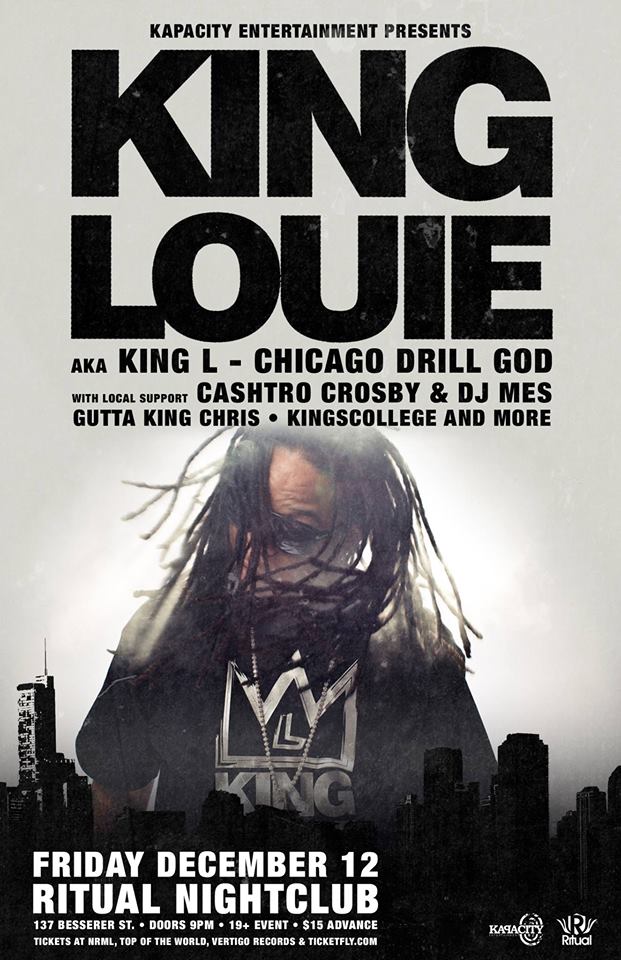 Toronto indie folk pop band The Strumbellas will be making their Ottawa return this Friday night as part of their Ride On North America Tour. The Juno-Award winning group will be performing live at Mavericks alongside Toronto rock and rollers Sam Cash & The Romantic Dogs who’ll take care of opening the show. 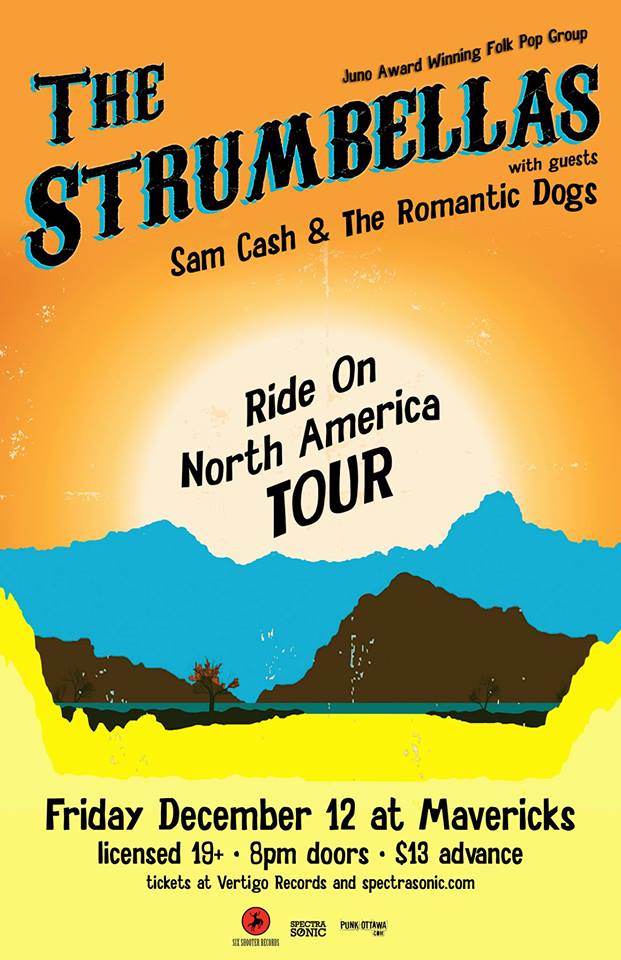 This Friday night at Gabba Hey! two-time TIFF winner Asphalt Watches will be premiered along with the short film Women’s Advocate. Asphalt Watches is a feature-length animation based on a real-life hitch hiking trip taken by the two filmmakers, Shayne Ehman and Seth Scriver, and details the hilarious and harrowing journey of Bucktooth Cloud and Skeleton Hat as they travel eastward across Canada. Artists will be present after the screening to engage in a chat with the audience. This is a free event, but guests are asked to RSVP as space is limited.

If you’re into techno/synth/experimental/noise, you’ll want to make your way over to the Daily Grind this Friday night for the first Transmit – Live Session. The event will feature live sets by artists Paraphonique, Apriorism, and Transmit. 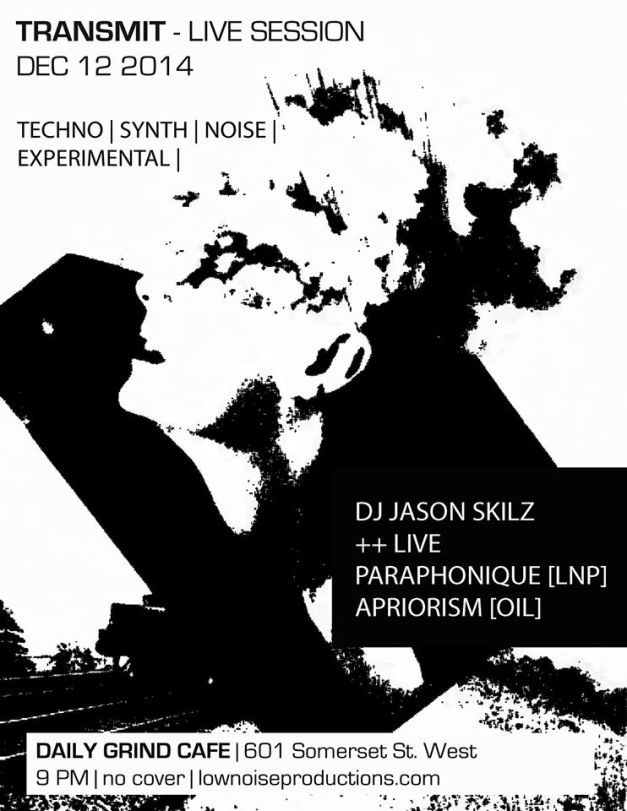 The December edition of Hip Hop Karaoke Ottawa is happening this Friday night at the Elmdale with hosts DJ So Nice and Atherton. If you want to perform and impersonate Run DMC by doing that Christmas in Hollis track you spent hours memorizing in front of the mirror, now’s your chance to show the world what you’re made of.

What better place to complete your holiday shopping than at the old fashioned, European-style Christmas market taking place in the beautiful village of Wakefield this Saturday, December 13? In addition to the local vendors, you can expect music, bonfires, twinkle lights, delicious food, mulled wine, hot chocolate and more!

The one-of-a-kind INDI Bazaar is being held this Saturday and Sunday at SAW Gallery. Featuring a gathering of painters, photographers, designers, musicians, and onstage performers, the event is intended to showcase Ottawa’s independent talent as well as jumpstart the scene for many more similar events of to come. As part of the lineup, Ottawa’s hip-hop trio Just Poets will be performing live on December 13. 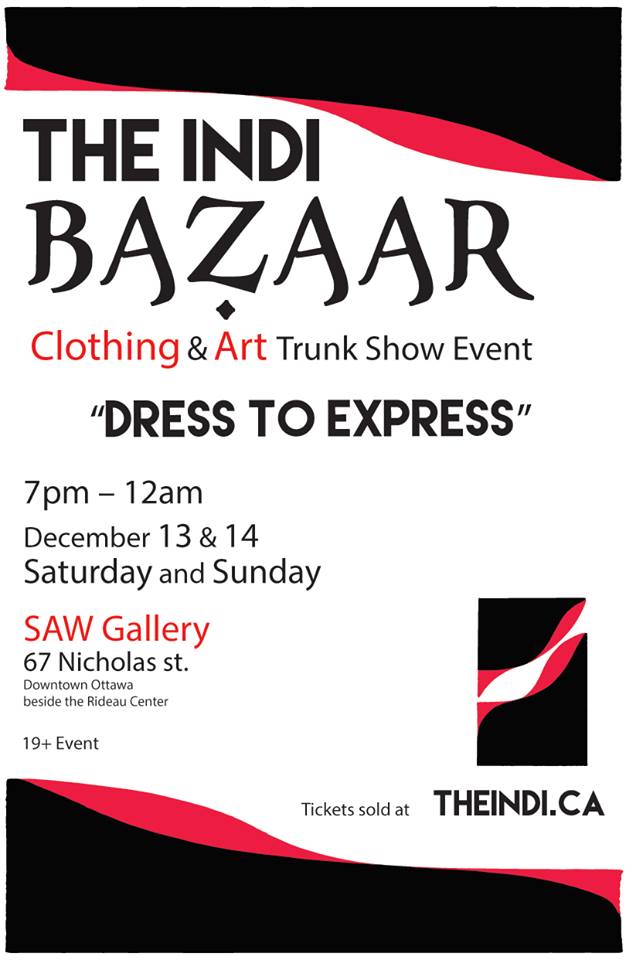 This Saturday, December 13, Rocksteady Bookings is celebrating its third birthday with a special edition of Bars and Breakbeats. The local company, launched by Andrea Desjardins, is celebrating by presenting an all female-fronted music night featuring Dead Centuries, Tindervox, Danielle Allard, Arms of the Girl, and Sweet Alps. RSB’s “Ladies First” inspired birthday bash will showcase five great bands for $5, making it an easy and affordable way to support home-grown talent and hardworking ladies of the National Capital. 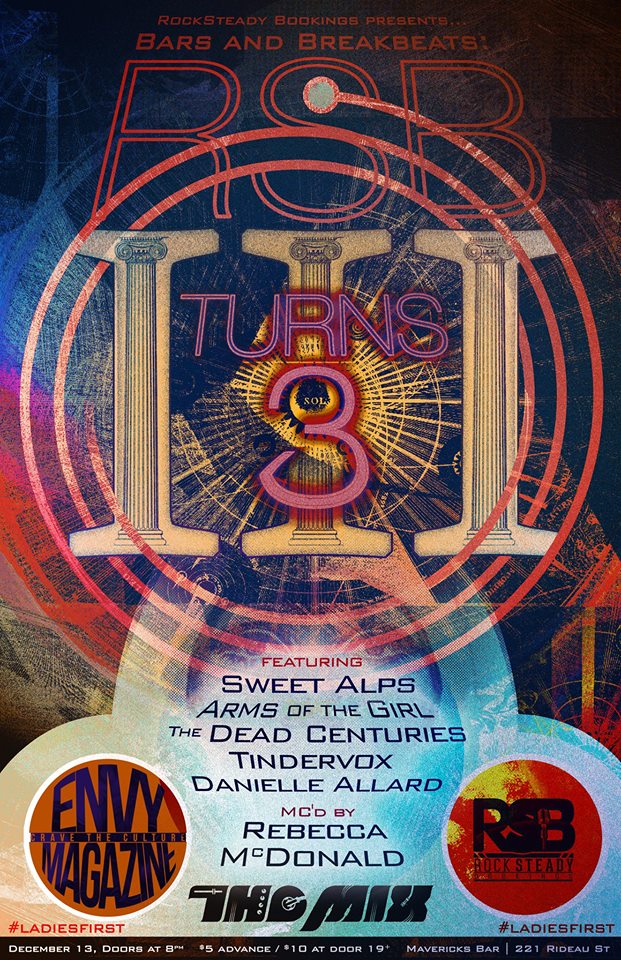 If you enjoy garage punk/rock, be sure to head over to Gabba Hey! this Saturday night to rock out to spooky beach punk all-female band Bonnie Doon, post-punk project The Young Offenders and surf-gaze newcomers Ladyboy. Plenty of pizza shark for all. 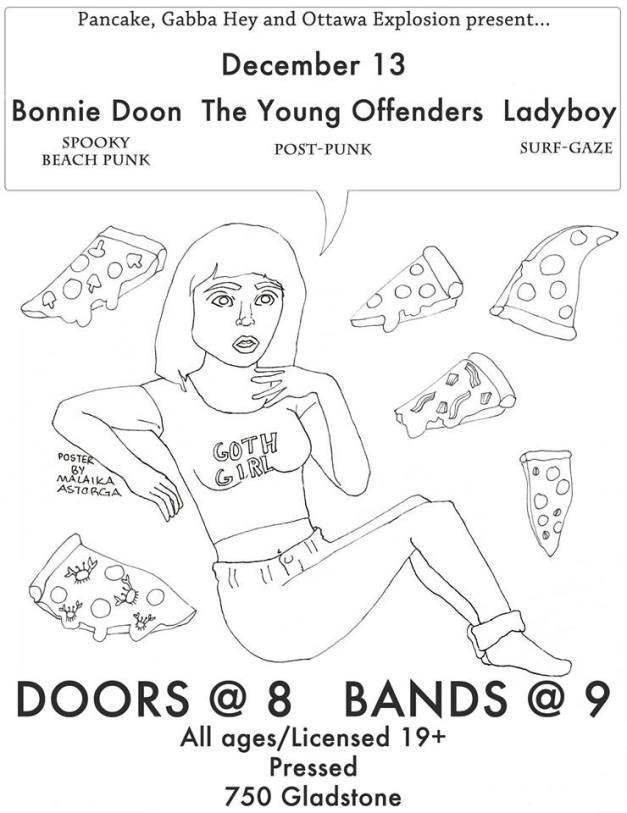 Toronto punkers The Flatliners will be performing live at Ritual this Saturday night and sharing the stage with Toronto punk rockers PUP, Rochester melodic hardcore/punk band Such Gold and Dundas punk rock group The Dirty Nil.

The Gallop invites you to join them for the release of their third EP ‘Tall Tale Tellers” this Saturday night at the Rainbow Bistro. The local indie rock band will be performing new material and will be sharing the stage with special guests Atherton and Stay Classy. 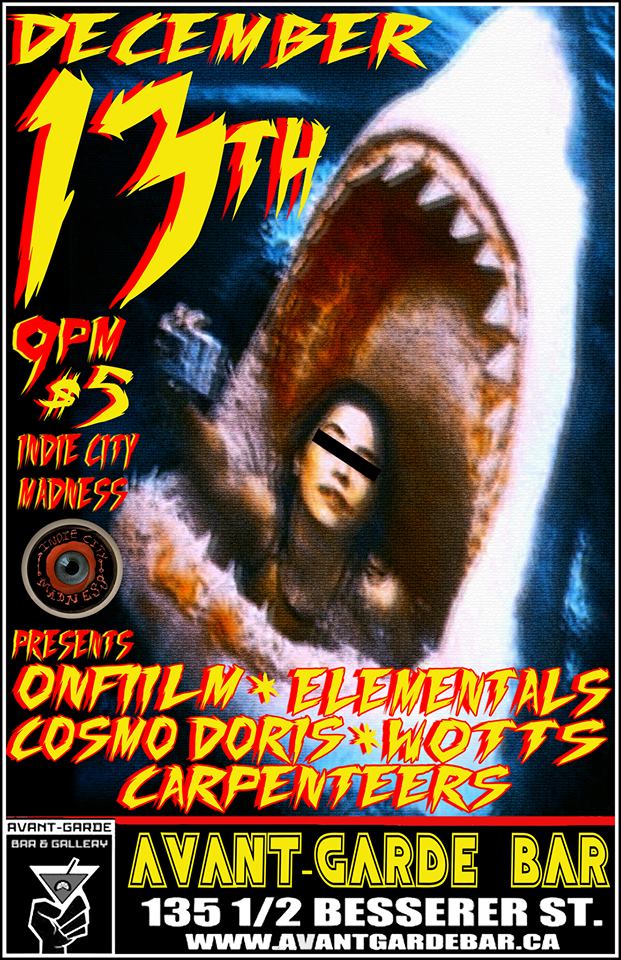