Thanksgiving Long Weekend in Ottawa-Gatineau: From Radioactive and Diana to Grandtheft and the Freak Show

Are you sticking around the National Capital Region for the Thanksgiving long weekend? If so, rest assured there’s lots happening in and around the city over the course of the coming week. Take a look at Eventful Capital’s carefully selected event ideas listed below for suggestions on what’s noteworthy in the days ahead.

This Thursday is particularly busy in Ottawa-Gatineau. First off on the Quebec side, Le Troquet is presenting an authentic freak show from Thursday, October 10 to Saturday, October 12 starring the mystical Blue Mushroom Sirkus Psyshow. You can opt for a dinner and show or simply make your way over at 11pm for the debauchery. 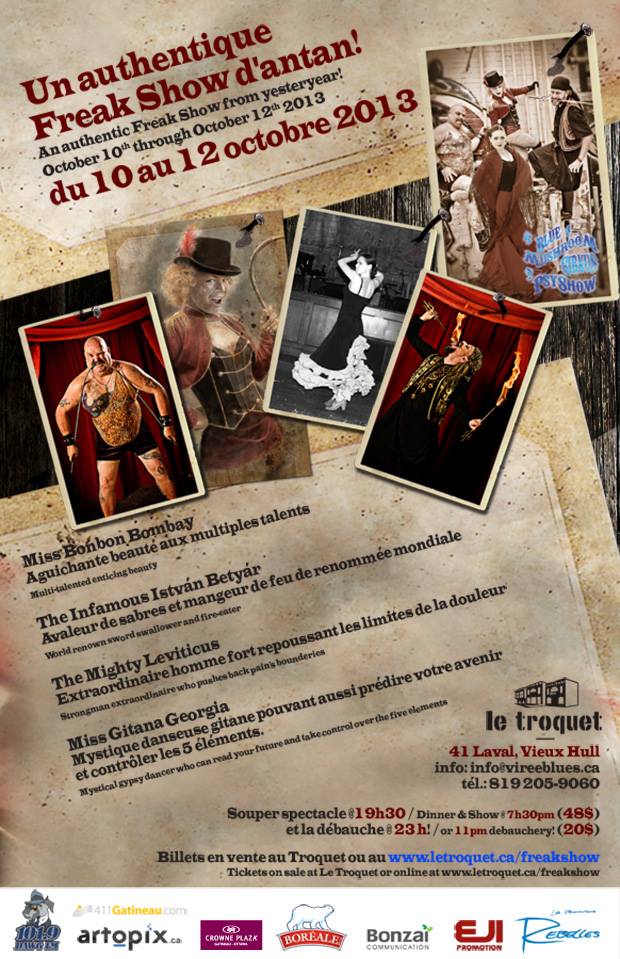 On Thursday, October 10, Saskatoon-based group Twin Voices will be performing live at Pressed Cafe. The indie folk/pop project will be joined on stage by Ottawa’s own Orienteers and Mehdi Hamdad of Mehdi Cayenne Club.

Another event happening this Thursday is the new monthly RADIOACTIVE taking place at Mercury Lounge. This week’s edition will feature live performances by Ottawa folk-rock pop group The Humble Divines and country rock band The Wild Vines. This is a great opportunity to discover live homegrown music and to support the local scene. 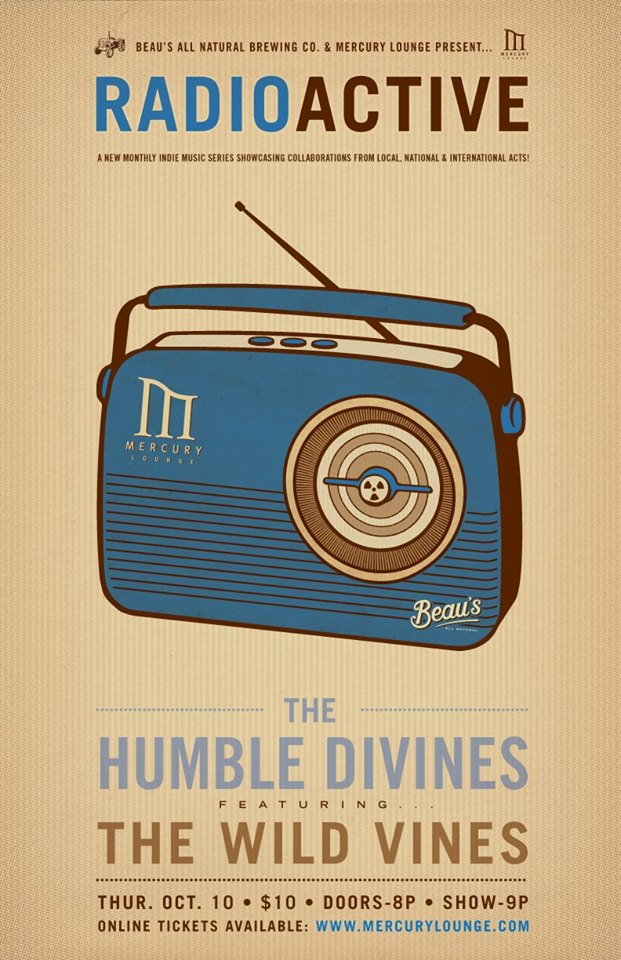 Over at Zaphod Beeblebrox this Thursday, you can catch Charlottetown indie/rock band Paper Lions perform live. The Canadian four-piece, who’ll be playing in Ottawa as part of the My Friends North American Tour will be joined by Toronto rocknrollers Teenager Kicks and Wakefield indie rock band Farewell Davidson.

Also this Thursday, CKCU FM’s Debaser show presents Doomsquad, HSY, and Blue Angel performing live at Mugshots. The punk garage bands are scheduled to start at around 10pm, but arrive early to check out the art installations and liquid light visuals.

Vertigo Records is celebrating its 10-year anniversary this Thursday, October 10 with a party at Mavericks. The event will feature live performances by metal/punk/rock bands SNFU, Ab Irato and Flying Fortress. 10/10/10, I see what you guys did there.

Don’t be confused. Although it’s on Friday, Mercury Lounge and Beau’s All Natural present a second instalment of RADIOACTIVE this week. Two in one with live performances by Ottawa’s own rawbeat rockers StillNative and Mindil Beach Markets all the way from BC. 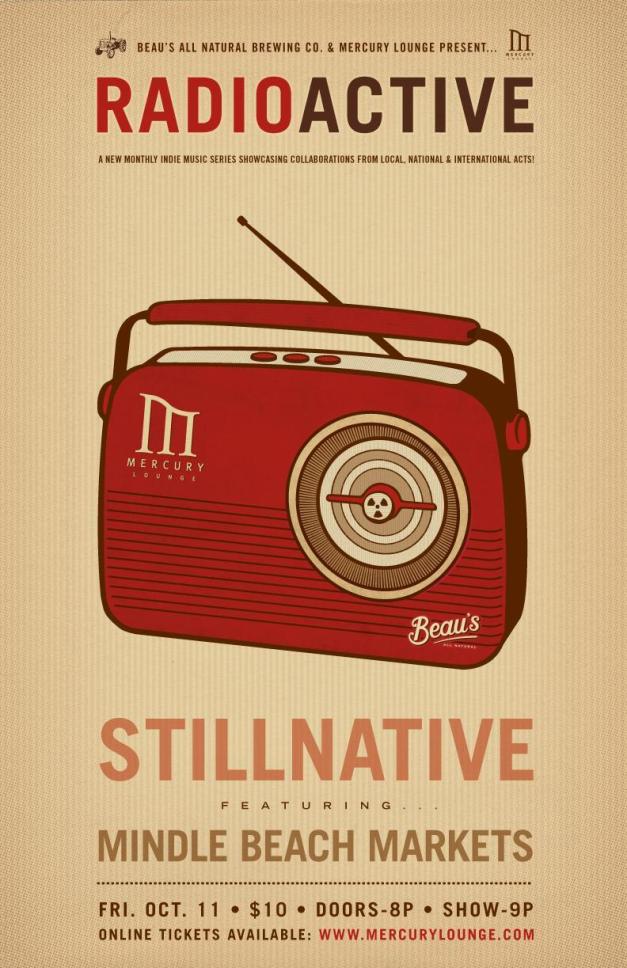 Ottawa favorites Claude Munson & The Storm Outside will be giving a live performance at Pressed Cafe this Friday, October 11. The local folk rock group will be live alongside trio Delta Will and singer-songwriter Keturah Johnson.

Ottawa Explosion & Kichesippi Beer present the 6th edition of Funhouse! this Friday, October 11 at Mugshots. Friday’s edition will feature live performances by punk groups TV Freaks of Hamilton, Blood Red of Pennsylvania and Thee Nodes of Montreal. The poster alone is enough to make you want to go.

Do you miss playing Mario Kart 64? Well you get to do just that this Saturday, October 12 at the Vintage Video Game Tournament being held at the Royal Canadian Legion. This marathon gaming experience is also a fundraiser for Ottawa’s Queer Community Centre, PTS. Sign your team up in advance or attend to cheer your friends on. Monopolatte will also be providing entertainment with tabletop games.

If you’re into indie experimental dance you want to check out DIANA at Mavericks this Saturday, October 12. The Toronto indie dance group, who’s recently released its debut album Perpetual Surrender under Paper Bag Records, will be performing live alongside Ottawa’s own Silkken Laumann and Black Usher. A highly-anticipated show for many! 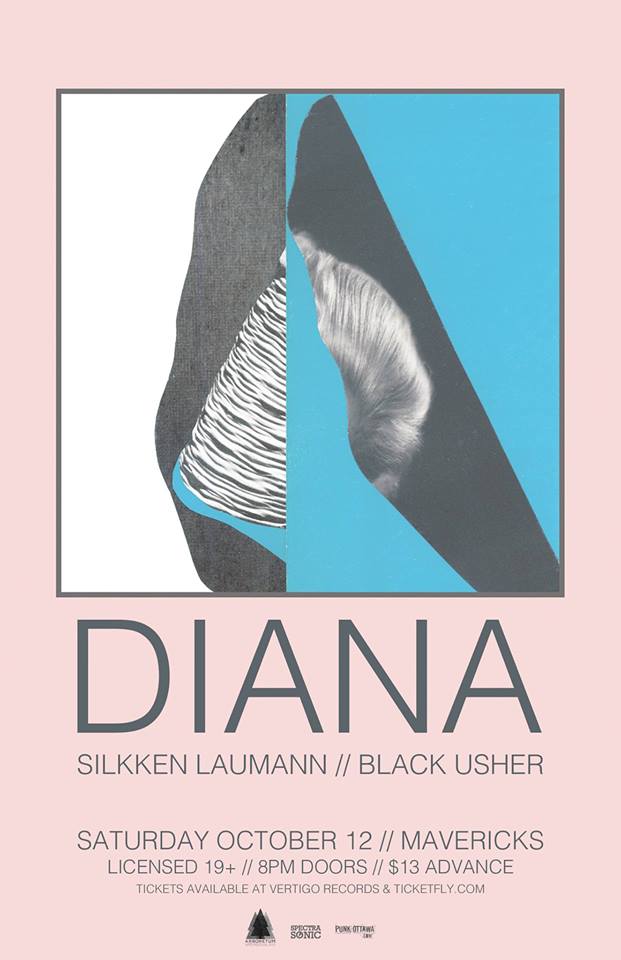 This Saturday over at Ritual, catch Toronto-based Producer and DJ Grandtheft for a live DJ set that he’s giving as part of his Mobbin Tour. Grandtheft is considered to be one of the best live DJs that Canada has to offer so if you want to dance this weekend he’s guaranteed to make you move. 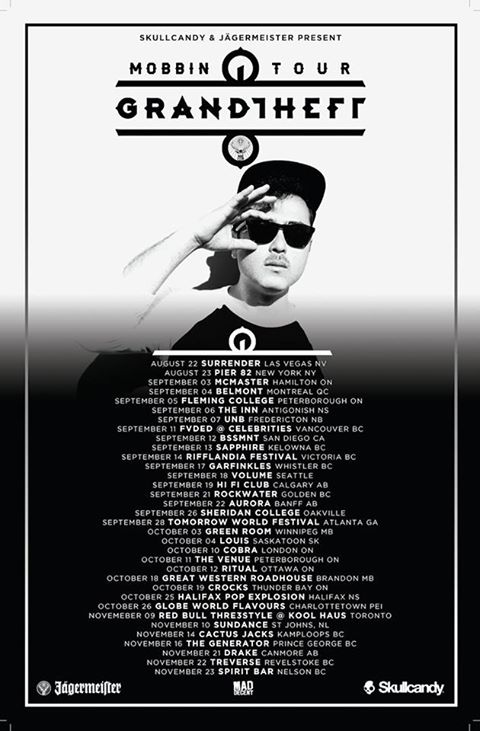 Enjoy your week in the National Capital!

Day 6 of the 2013 Ottawa Bluesfest was beautiful and it showed as festival-goers arrived early and in large numbers to see acts such as Animal Collective, El-P, Solange, Passion Pit, A Tribe Called Red, and Weezer perform live.

Animal Collective opened the evening on the Bell Stage, but unfortunately gave a rather underwhelming performance. Although their music may be enjoyable in a different setting, it certainly wasn’t meant for an inattentive crowd of festival-goers, many of which had arrived early for Weezer, the night’s headliner. What’s more, the experimental psychedelic/neo/art rock band from Baltimore, Maryland, hardly interacted with the crowd, which certainly didn’t help with the show’s overall energy level. At one point, a group of dancing people wearing animal masks and costumes came out of nowhere and provided the sole entertaining thing that happened during Animal Collective.

Meanwhile on the River Stage, rapper El-P, also known as El Producto, was concluding his set alongside a few sidekicks. Regardless of his notable performance, the crowd wasn’t too enthusiastic despite the rapper’s attempt to get people to react to his music. El-P did his thing and finished his set with the track A Christmas Fucking Miracle, maybe not the best choice when it’s almost 40 degree Celsius with the humidex, just sayin’.

Day 6 was off to a disappointing start until Solange hit the River Stage with her group of funky musicians and back-up singers. An impressive crowd had gathered for a chance to see Beyoncé’s little sister perform live for the first time in Ottawa. The 27-year old came on stage 10-minutes behind schedule wearing an adorable red summer dress, looking as cute as a button.  She kicked off her set with the song Some Things Never Seem to Fucking Work, but apparently this wasn’t supposed to be the opening track. Ironically, it fit well as it turned out the sound was completely off and we could hardly hear her vocals. Solange even had to stop and apologize to the crowd for having to deal with the worst sound conditions in her career! It was unbearable for her and the audience and a shame coming from one of the biggest festivals in North America. Despite the horrible technical problems, the singer-songwriter remained professional and seemed to enjoy her time on stage, as she danced around and pointed out the beautiful setting and sunset before her. The setlist included the songs Don’t Let Me Down, Locked in Closets, Bad Girls and Losing You. She thanked the crowd many times for their presence and support and ended her set earlier than expected, most likely due to the sound quality, or lack thereof.

Discouraged by the way the performance turned out, Eventful Capital headed to the Black Sheep stage to check out part of Grandtheft’s set. The Toronto DJ and producer did not disappoint as he played some great remixes and original material from his repertoire and got the crowd moving. He wrapped things up with his remix of Calvin Harris and Florence Welch’s Sweet Nothing to which festival-goers sang along.

Back on the River Stage, fans patiently waited for Passion Pit to take the stage as the group started 10 minutes late. The American musicians, who are no strangers to the Ottawa Bluesfest, opened their set on a high note with The Reeling from the debut album Manners. They continued with I’ll Be Alright and the popular Little Secrets and had great on-stage presence but since the sound started off again and that there was more to see, it was off to the Black Sheep stage for Eventful Capital.

Ottawa’s own A Tribe Called Red certainly saved the day with a contagious high-powered set that had everyone dancing! It was great to witness the amount of people gathered behind the Canadian War Museum to see the local DJ collective perform live. Their set list included the tracks Braves (Remix), Trap Heat, Unlimited Trap, and Sisters along with some new material that was very well received by the crowd. It was a great home-coming for the boys who have been on tour and Ottawa get them a warm welcome demanding an encore at the end of the set, which A Tribe Called Red obliged to.

Despite technical difficulties, Day 6 of the 2013 Ottawa Bluesfest is definitely a highlight for Eventful Capital and it will go down as a memorable day packed with amazing live music.