Eventful Capital’s Weekly Picks: From illScarlett and Hooded Fang to Texas In July and Kaytranada

Another blog post, another week filled with holiday craft markets, music shows, dance parties and events of all kinds taking place in and around Ottawa-Gatineau. As you can see, there’s no shortage of fun things happening in our capital city so wether you’re into live music, dancing, craft shows or exhibitions there’s sure to be something to quench your event-going thirst. Take a look at Eventful Capital’s weekly picks below to help plan the days ahead. B.C. DJ Stickybuds will be giving a live set in the National Capital this Tuesday, November 25 as part of his Fall Into Winter Tour. The Funk / Hip Hop / Reggae / Drum N’ Bass / Glitch Hop / Mashup DJ is sure to bring the West Coast vibes to Babylon and warm up the place with his contagious selections.

Massachusetts deathcore/metal group Within The Ruins will be performing live at Mavericks this Wednesday night. As part of their Canadian Invasion tour, the group will be joined on stage by Pennsylvania metal/hardcore band Texas In July, Gatineau metalcore formation Standing On Oblivion, Ottawa death metal 5-piece Accursed Creation and Ottawa metalcorers O’byrne.

The Viree Blues Boreale, which is celebrating 10 years with its 20th edition, is happening at the Petit Chicago this Wednesday, November 26. For the occasion, the organizers present a live performance by Juno-award winning bluesman Dan Livingstone and The Griffintown Jug Addicts alongside David Gogo. If you’re a blues lover, there’s no better place to go this week.

Montreal post punk/psych rock/metal band CROSSS will be giving a live show at Pressed Cafe this Wednesday, November 26. Also on the bill that night, Montreal surf rock trio Moss Lime and Cincinnati post wave future core group Self Surgery will get the night of music underway. 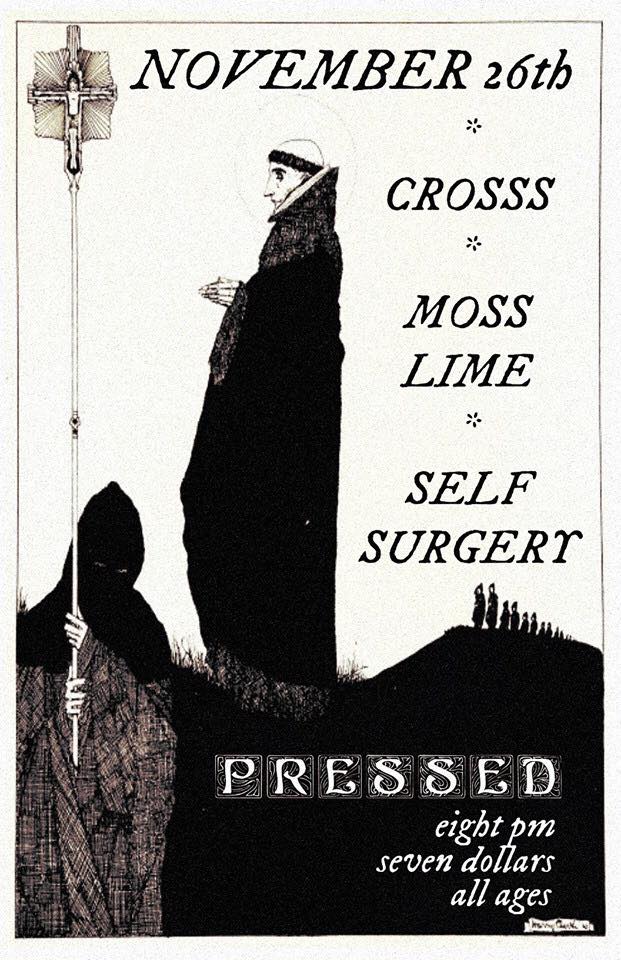 If you’re into indie folk/rock/punk, head to House of Targ this Wednesday night to catch headliners RM & The Honest Heart Collective alongside special guests US With Wolves Cast in Cadence of Ottawa.

Attention history buffs: this Thursday evening, November 27, the Canadian Museum of History is launching a new special exhibition called 1867 – Rebellion & Confederation. The official opening, which gets under way at 5:30 pm, is open to the public and will feature a photo booth, a town crier, speeches, refreshments, as well as a visit of the exhibition.

Also happening at the Museum of History, the 5th annual Christmas Market kicks off this Thursday, November 27 and runs until Sunday, November 30. With 70 local vendors exhibiting their products, this is the perfect place to find holiday gifts. Meet local exhibitors, discover delicious regional products and unique handmade objects, and experience the creativity and enthusiasm that drive artisans of the area.

Saxophonist Dustin Finer, who performs a mixture of arranged and improvised music, accompanied by original lighting installations created by his Daniel Freder, will debut the duo’s project at La Petite Mort Gallery this Thursday evening. The PWYC event will also feature a special set by opening future-folk duo Bosveld. 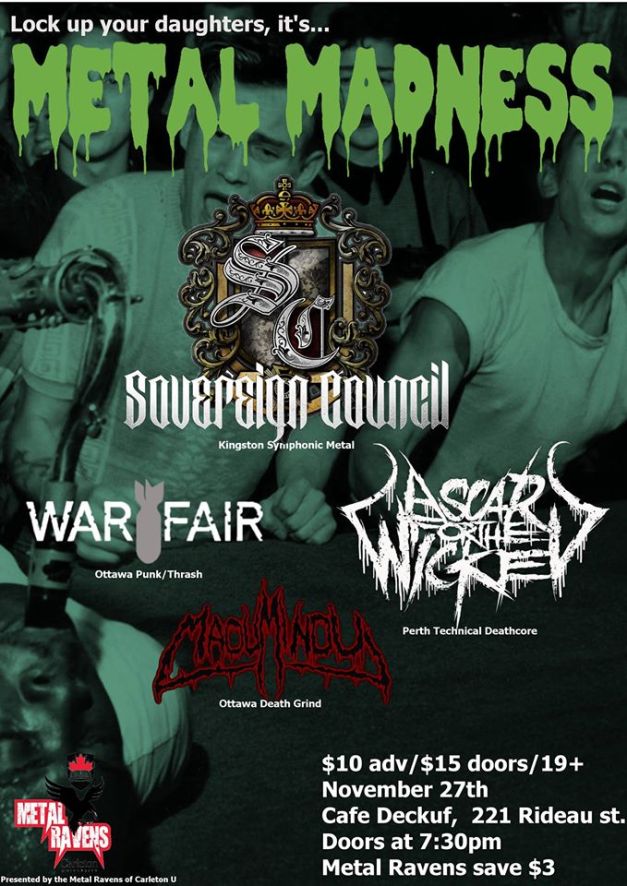 illScarlett will be making a stop in Ottawa this Thursday night as part of their Fall Tour. For the occasion, the Ontario punk/rock/regage band will be performing live at Mavericks alongside special guests Lemon Cash, StereoKid and Remember The Fire.

One of the most popular dance parties in the city, Frenzy is going down at Babylon this Thursday night. The latest instalments of the monthly dance party have been off the hook and featuring some of the best upcoming and established music producers out there. This time around will be no different as Straight Goods welcomes the return of Montreal producer and Frenzy favourite Kaytranada.

Over in Gatineau this weekend, there’s a big art show at the Congress Centre featuring over 40 artisan kiosks with all sorts of art for sale as well as free workshops and demonstrations. 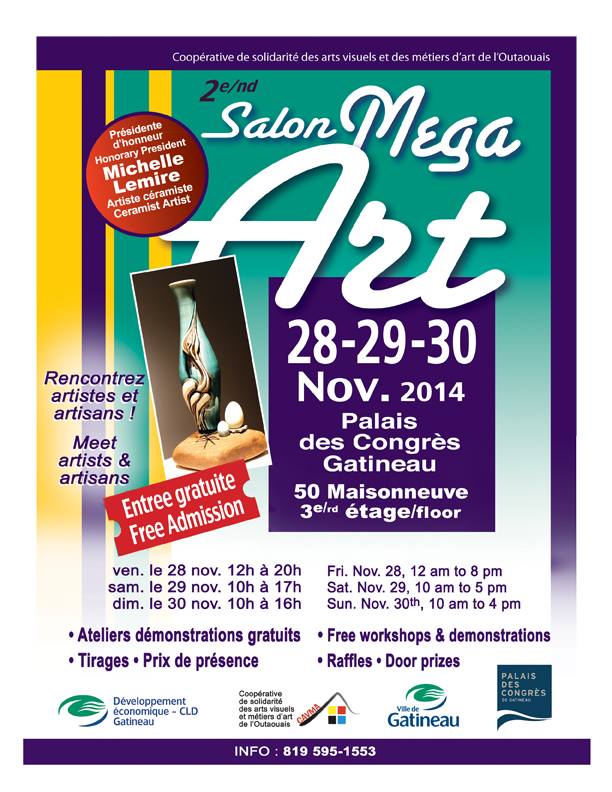 The FAU Collective invites you to celebrate its 5th anniversary at La Filature in the Hull sector of Gatineau. Join the crew for a unique evening featuring beats from 5 DJs, live sets from 5 musicians and visual projections by 5 VJs. A full night of electronic art, starting at 5pm with a cocktail for the media, followed by audio-visual performances complete with a dance party. Happy birthday FAU!

Indie rock pop band Tokyo Police Club will be back in Ottawa this Friday, November 28. For the occasion, the Newmarket, Ontario four-piece will be joined on stage at Ritual by Vancouver indie rock group Said The Whale and Vancouver garage pop/rock/punk duo The Pack AD.

The inaugural Capital Punishment Metal Fest is taking over Cafe Dekcuf this Friday, November 28. For the occasion their will be live sets by Dark Century and Sanguine Glacialis of Montreal, Fumigation and Volatile of Ottawa and Deathrow 6 of Gatineau. A first in a new series of mini-metal fests for the National Capital Region.

Toronto-based chillout electronic duo Snowday are embarking on a mini-tour to promote the release of their top notch debut album “As We Travel”. The guys will be making a stop in Ottawa this Saturday, November 29 to give a free preview set at the Record Centre followed by the official release show happening later than night at Mugshots. For the occasion, Snowday will be joined by special guests Loopsy Dazy, Modern Dinosaurs, and Ankle MiX. 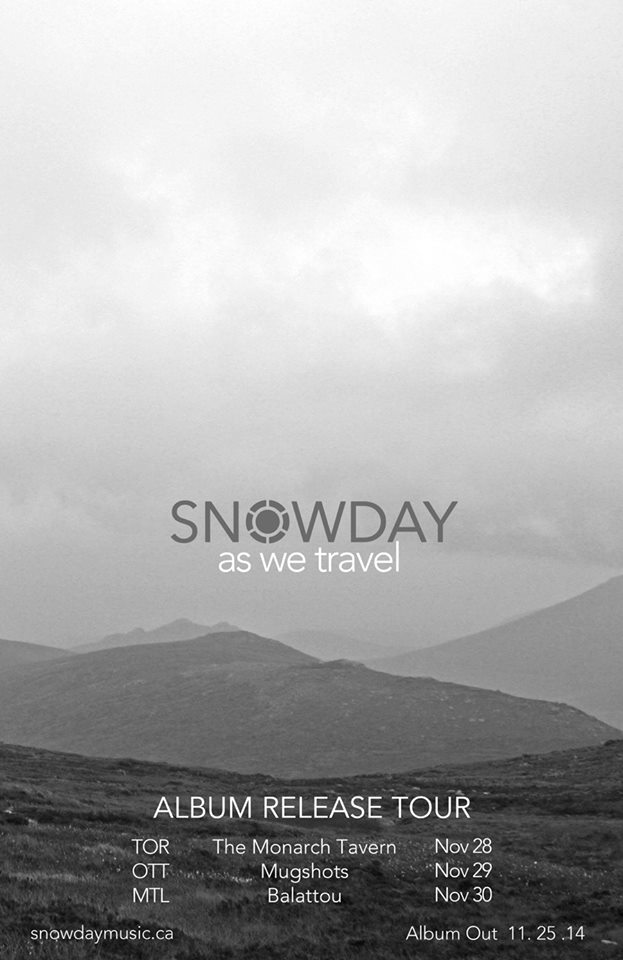 If you’re looking for a live rock show this Friday night, you might want to head over to Mavericks to check out rock/power pop four-piece Sloan. The Toronto-based band will be giving not one, but two sets for your listening pleasures. They’ll be joined by local “surprise” guests apparently as no opening acts have been announced yet. Of maybe it’ll be an entire night of Sloan? Who knows. Only one way to find out…go to the show!

The Impressions Jazz Group, an eclectic 5-7 piece jazz ensemble that performs original compositions by saxophonist, composer and group leader, Daniel Hollenberg, will be live at Pressed Cafe this Friday night to bring you a night of live improv music.

The November edition of Nature Nocturne is being held this Friday night at the Canadian Museum of Nature. For this instalment, you can expect live sets by Parabola, JK3 playing Chrono Trigger and a special guest DJ set by members of Pony Girl.

Over at House of Targ this Friday night, check out live local music courtesy of Yuma County, Chris Page and Chops and The Holics will you stuff your face with perogies and spend all your change playing pinball. 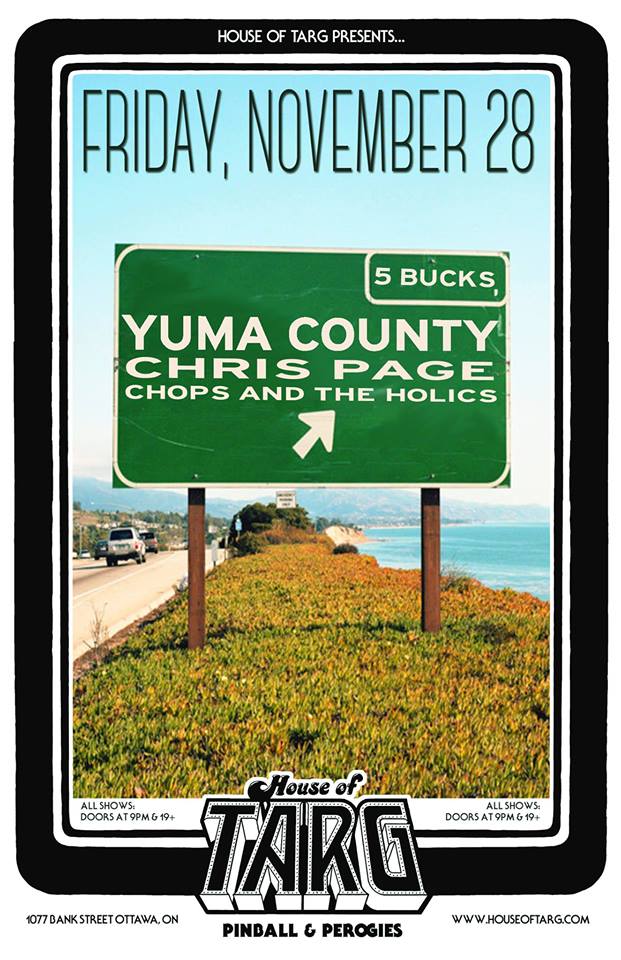 If you’re into raving, know that Ottawa has its scene and that it’s alive and well. This Friday night, the Valhalla Sound Circus launch party is going down at an undisclosed location to be announced 24 hours before. The all-nighter will feature live sets by headliners Megalodon, The W4rriors, and Construct as well as local support by Strange Future, Disco-Nekt and Saxon among others.

Over at the Bistro in the Hull sector of Gatineau, the Society crew, which has been doing big things and bringing some notable up and coming talent to region, is introducing a new night called Above and the launch party, happening this Friday, November 28, will feature a live set by Montreal’s own GrandBuda. Check it.

The November edition of Party Pack goes down this Friday night at the new Multi Social Room with usual suspects Laocapone an Foster. This instalment will feature a special guest DJ set by J.U.D.

The Mercury Lounge is introducing a new dance party dubbed Dance Ritual happening this Friday night at the club. For the launch, none other than the legendary Grammy-award winning “Little” Louie Vega will be in the building to give a long extended 4 hour set for the house and dance lovers of the National Captial.

The Ottawa Stilt Union invites you to join them this Saturday, November 29 for a family-friendly Froggy Winter Tea Party at St. Giles Presbyterian Church. The fundraising event will feature crafts, music, tea, cookies as well as a special performance of ANURA, an original stilt show created by the Ottawa Stilt Union. 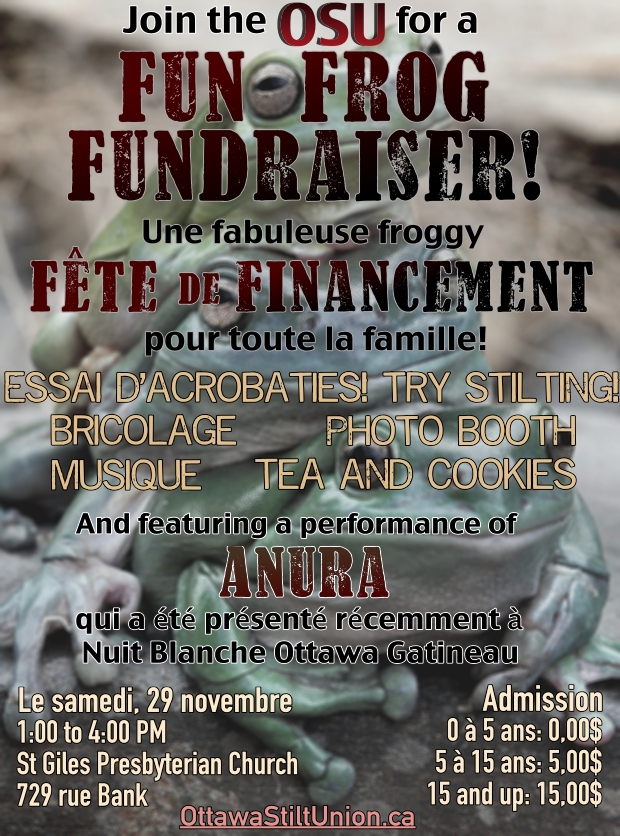 Toronto indie-rock band Wildlife will be performing live at Zaphods this Saturday, November 29. The 5-piece will be sharing the stage with Vancouver pop-rock group Dear Rouge and Ottawa pop rock outfit Mosely. 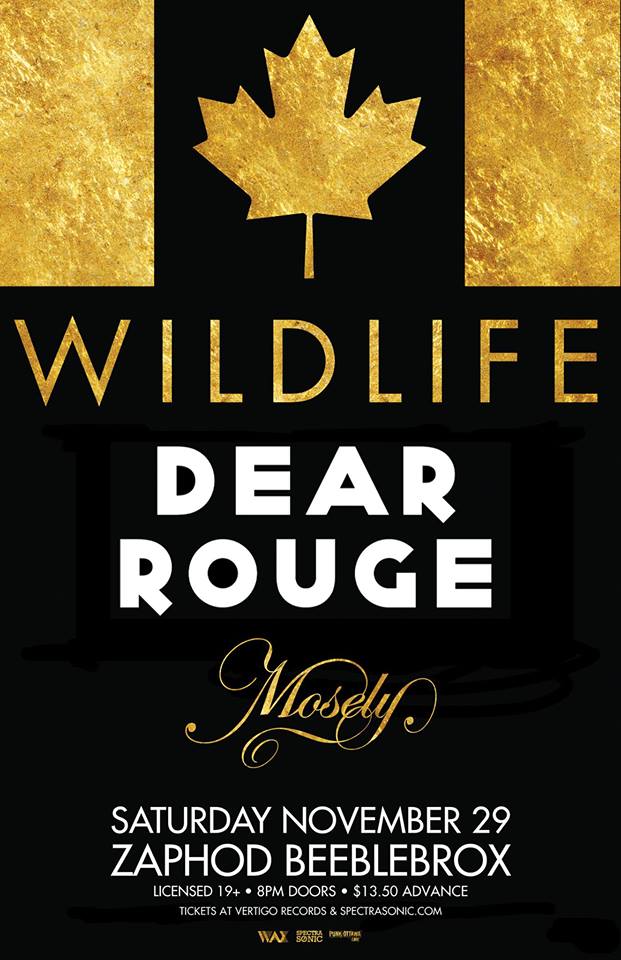 Another noteworthy show happening at House of Targ this week is going down this Saturday, November 29. This one will feature live sets by Montreal punk rockers The BCASA, Ottawa garage punk band Average Times and Toronto surf rock group Dirty Church.

Ottawa improvisational psych/progressive group The Band Whose Name is a Symbol will be presenting new material at Gabba Hey! this Saturday night. For the occasion, they’ll be joined on stage by Montreal psych/rock group Pachyderm and Ottawa experimental rock project Flecton Big Sky.

Out in Carleton Place this Sunday, the one-of-a-kind Finders Keepers trunk show is happening from 10am to 4pm. With over 40 vendors present, find unique, find handmade and find that special rare gem.