Event Review: Electro Hop and the King of Pop

A couple weeks ago, I blogged about two upcoming events that I was looking forward to attend: the Kid Sister show at Ritual and the Cirque du Soleil Michael Jackson The Immortal World Tour at Scotiabank Place.

I promised I would write a review about these two events, so here goes.

The first event I was excited about was the Kid Sister show which took place at Ritual  on Monday, September 26

Well, as expected, a Monday night show in Ottawa attracts a Monday night crowd. Doors opened at 10:00 pm so my man and I arrived around 11:00 pm, hoping to arrive during A Tribe Called Red’s set. When we got there, the DJs from ATCR were only getting warmed up and the place was practically empty. Typical Ottawa scene. Regardless, the beats were bangin’ so we got ourselves some Heinys to start the night. It wasn’t long until the boys got us moving and grooving.

Around 12:15, the club had finally reached a somewhat decent Monday crowd and the people had gathered around the stage area for the main performance of the night. DJ Willy Joy came out on stage to get things started as he shouted ” What up Ottawa!” to the 60 some people who yelled back shyly. Kid Sister then jumped on stage and kicked things off with her recent single “Kiss, Kiss, Kiss”. She followed by “Right Hand Hi” and continued with “Southside” putting tons of energy in each and every track she performed for the audience. She ended her gig after only 30 minutes with the song that put her on the radar “Pro Nails”. Understandably, the Ottawa crowd was too small and not crazy enough for this Chi-Town party girl to keep the show going. Altough Kid Sis left the stage, Willy Joy stayed on the decks to keep the crowd (or what was left of it) dancing. Nonetheless, Kid Sister gave a great performance worthy of a night out on the town. 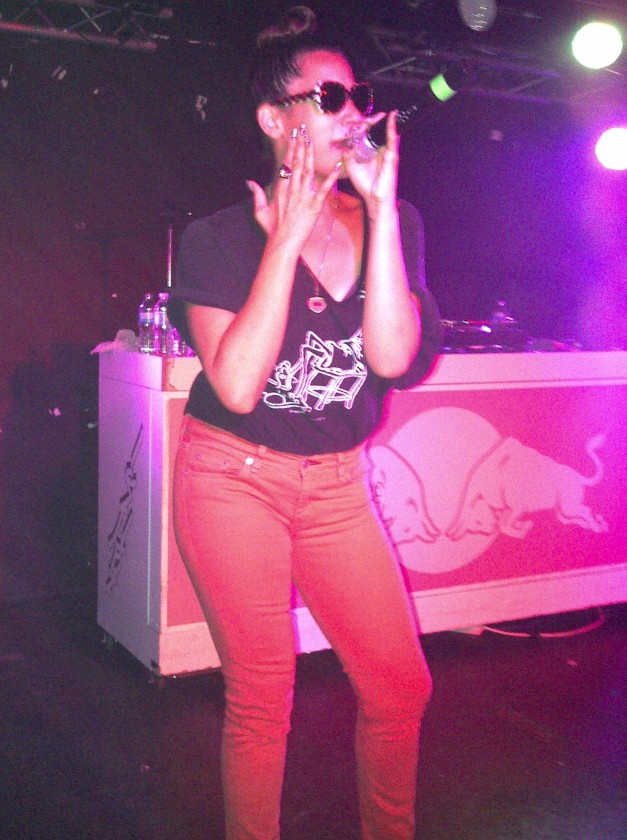 The second event that I had been patiently waiting to attend for a year (!) was Le Cirque du Soleil’s Michael Jackson The Immortal World Tour, a spectacle that was amazing in ways yet also disappointing in others.

Ottawa was the second stop on the world tour. The show premiered last week in Montreal in front hundreds of international media, thousands of people from the industry and even Michael Jackson’s family. The critics and reviews were quite mixed, but I was going there full of hope and belief in the magic of Le Cirque du Soleil. I knew that Guy Laliberte could not let us down, especially with a tribute dedicated to THE Michael Jackson. Well, at least that’s what I thought, but sadly, he proved me wrong in some ways.

First off, how do you create a Michael Jackson show without Michael Jackson? As writer and artistic director of The Immortal, Jamie King paints a picture of Michael’s career primarily through choreography using various lighting effects and by showing us images of him on big screens, which create a larger than life portrait of the King of Pop. Regardless, several times throughout the show, there seemed to be an emptiness on stage like something was missing, weather it was Michael himself or the lack of visual stimulation and artistic creativity that is so unique to the Cirque du Soleil.

Undoubtedly, there were some fantastic moments like the kid in the flying hot air balloon during “Childhood”, the recreation of the scene for “Smooth Criminal”, the costumes and choreography in “Thriller”,  the aerial act  and visuals in “Human Nature”, the robots in “They Don’t Really Care About Us”,  and  the ‘glow-in-the-dark’ iconic items in “Beat It”. A couple of parts made me shed a few tears while several acts made me clap, dance in my seat and smile from ear to ear as I sang along to my favorite MJ songs.

Having said this, I don’t consider The Immortal to be completely worthy of a Cirque du Soleil show nor worthy of Michael Jackson himself. Le Cirque du Soleil would normally include more acrobatics, aerial acts and circus performances to a show like this considering Michael Jackson’s creativity and unique talent. On several occasions, King and Laliberte missed out on the opportunity to showcase visual brilliance as they offered the audience a somewhat boring picture that lacked sensorial stimulation. For example, during “Scream”, King could have played with the idea of breaking things (in reference to the video where MJ is seen wit his sister Janet) and could have taken advantage of audio-visual effects more. Also, where were “Remember the Time” and “Dirty Diana”? Two musts in my opinion.

Overall, the show was very good, but good is just not enough to truly honour the life and career of the one and only Michael Jackson. Perhaps the show will get better once it settles permanently in Vegas and increases its production budget to 80 million…

Electro Hop and The King of Pop

As a Special Events Coordinator, I not only enjoy organizing events but I also love to attend a variety of them. From music festivals to exhibition inaugurations and Canada Day celebrations, I enjoy an entertaining event like a wine connoisseur appreciates a quality glass of wine.

I’m currently really looking forward to two events that I will be attending within the next two weeks.

The first event I’m excited about is a club show by electro-hop/rap artist Kid Sister hailing from Chicago, Illinois. I’m actually making a huge exception for this one. The show is happening tomorrow night, a Monday night, and although you’d normally never find me in a club on a Monday, I’m not missing this for the world. I’ve been wanting to see this girl ever since I discovered her back in 2007 when she released her “Pro Nails” single produced by one of my all-time favorite DJs A-Track and featuring the ever-so special Kanyeze West. There’s just something about her that makes her stand out from all the other female rap artists out there. Unique, super funky and with an incredibly original style and sound, she’s sure to offer an outstanding and highly energetic performance.

The show’s going down at Ritual, a club that currently offers some of the best club nights and concerts in Ottawa. Opening for Kid Sister is Ottawa’s-own Bear Witness from the all-Native DJ crew A Tribe Called Red, who’ll warm the crowd by spinning sweet sexy bass and heavy beats that are guaranteed too make people move their body. I always have tons of fun when the ATCR boys are in the building

I’ll let you know how it was after the fact, but no need to say this event’s going to be a banger.

The second event I’m dying to attend is the Cirque du Soleil’s Michael Jackson “The Immortal World Tour” which is stoping in Ottawa the weekend of October 8. I’m beyond stoked for this one, because the Cirque du Soleil is in my opinion the best circus troop in the world and they will be presenting a tribute based on one of the best musicians and performers of all-time, the one and only King of Pop. Based on Guy Laliberte’s record and long list of successful productions, this show will definitely blow minds and go down in history just like the icon it’s based on. I’m not sure what to expect, but I’m convinced that I won’t be disappointed thanks to the colourful creativity, breath-taking originality and definite wow-factor that the Cirque du Soleil deliver time and time again!!

I’ll let you know how much fun the events were once they’ve taken place…more to come!