Another blog post, another week filled with events happening in Canada’s national capital. If you’re in Ottawa-Gatineau this week and have time to check out some stuff out, there’s so much happening you might have a hard time choosing! Take a look at Eventful Capital’s weekly picks below for a glimpse into the number of events happening in and around the National Capital Region in the coming days.

This year, the NAC is paying homage to Ontario arts for its last special series shining the spotlight on a Canadian region. Ontario Scene is officially being held from April 29 to May 10 and as part of this, Eventful Capital has selected a few noteworthy events that stand out from the bunch and that feature local artists. For starters, this Tuesday night at Mavericks, there will be a live show featuring Toronto rock artist Danko Jones, Burlington rock band Say Yes and Ottawa rock group Eagleson.

All the way from Tokyo, Japan, indie punk band Zoobombs will be performing live at House of Targ this Tuesday night and they’ll be sharing the stage with local rock n’ rollers Glorious Moonrockets. $5 for two bands who are guaranteed to give a kick ass show? The price is right 🙂

As part of Ontario Scene, check out VideOntario: Outward Manifestons, an evening of short films featuring some of the province’s best filmmakers. The event, being held this Wednesday at SAW Video, will begin at around 7:30 pm and present a program curated by Scott McGovern, program director at Guelph’s Ed Video Media Arts Centre.

This Wednesday night at the Petit Chicago, the Virée Blues Boréale presents Martin Hury Blues Combo live in concert. The Argentenian blues artist will be performing live starting at around 8:30 pm so if you’re a fan of blues, be sure to check it out. 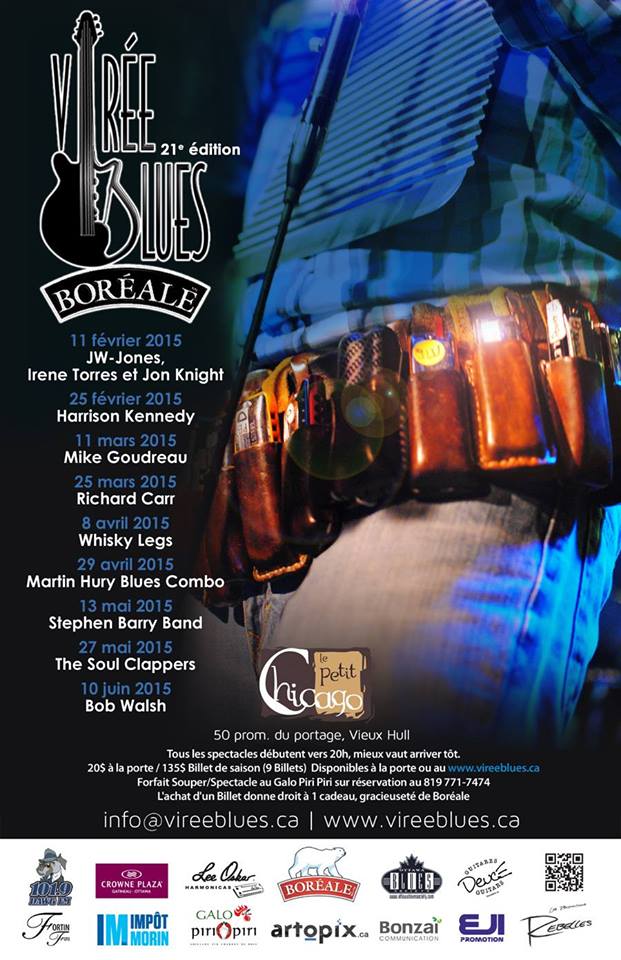 Halifax rock band Alert The Medic is returning to Ottawa this Wednesday night to perform live at Zaphods. The 4-piece will be sharing the stage with Ottawa indie rock band The Gallop (a favorite of mine) and Ottawa alternative rock group The Stringers. 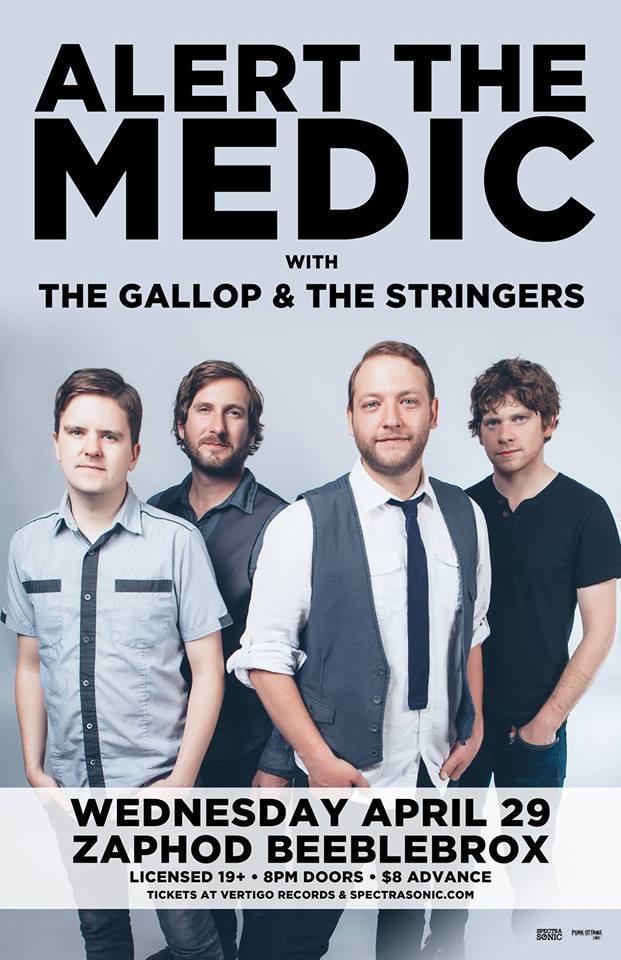 Starting this Thursday, April 30,SAW Gallery presents Michael DeForge: All Dogs Are Dogs, an expansive presentation of the artist’s work that marks his first major survey exhibition. Originally from Ottawa and currently based in Toronto, DeForge has produced an idiosyncratic body of work that has established him as a generation-defining voice in alternative comics. Moving across disciplines, All Dogs Are Dogs brings to life a hallucinatory world of degenerate creatures caught in existential quagmires. The exhibition comprises large-scale drawings and sculptures, prints, graphic novels, a limited-edition chapbook and a comic-strip mural commission on SAW’s façade and is being presented until June 27, 2015. 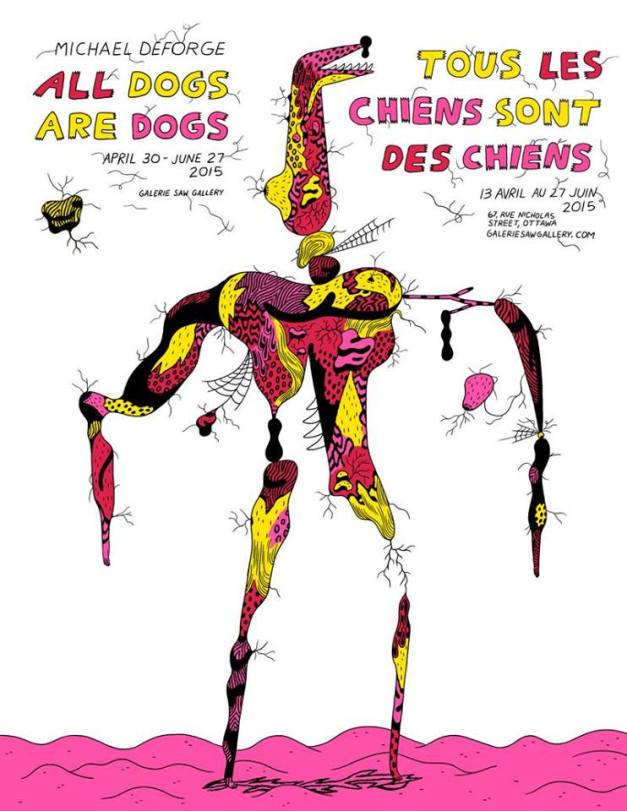 The hardcore and punk fans won’t want to miss Bleak Life Fest 2 happening over 3 days this weekend. The second edition of this new underground festival will be taking place at House of Targ as well as a couple of other venues and feature bands such as Occult Burial, Blanks 77 (first Canadian show in 15 years!), Stranger, Abyssed, Instinct of Survival, Torment, Parasytes, Durs Coeurs, Mueco, and Chloroform among others. Sure to be a ragin’ good time! 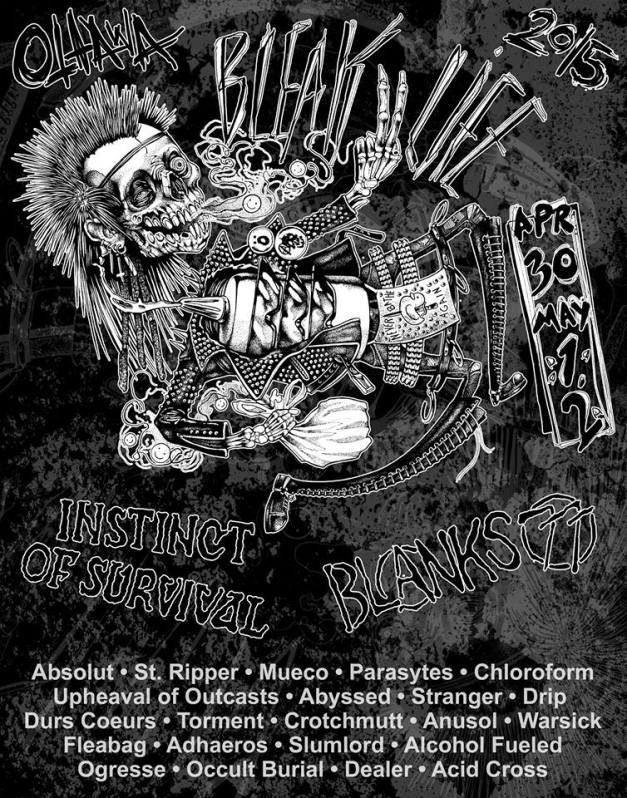 If your thing is more indie pop, be sure to head to Zaphod on Thursday night to catch Toronto electro pop band Brave Shores, Vancouver indie pop singer-songwriter and musician David Vertesi of Hey Ocean and Ottawa indie electro rock group Those Gulls. 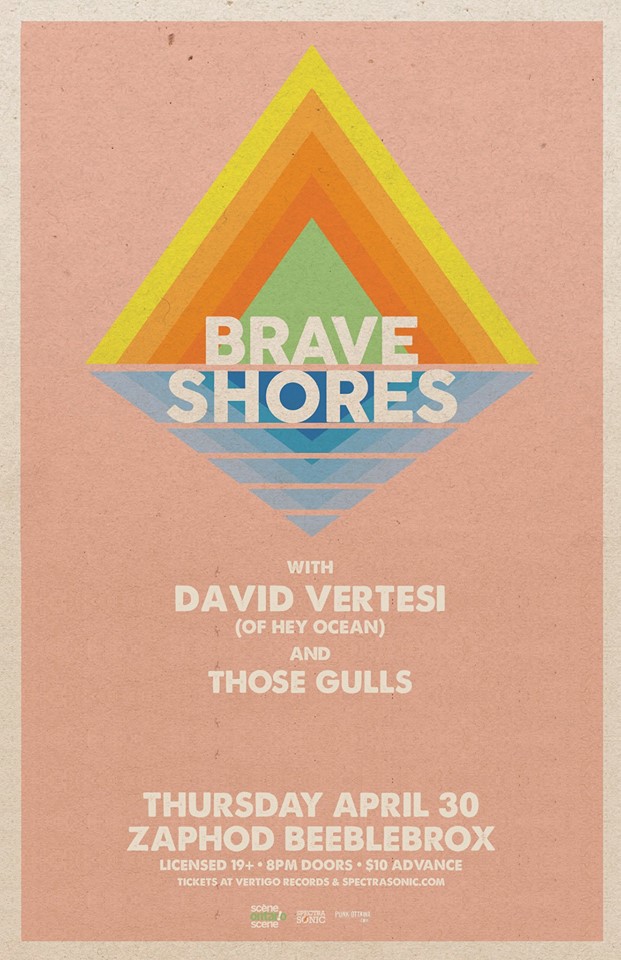 Fans of indie garage music should be nowhere else but at Club SAW this Thursday night for the Next Wave: Ottawa Music Spotlight event presented as part of Ontario Scene. The free show will feature three exciting bands from Ottawa’s independent music scene namely The Yips, Roberta Bondar and Bonnie Doon. There’s no poster, so for details just click on the shoe will you?

Canadian country singer-songwriter Brea Lawrenson will be having her CD Release party for #Brealieve at Algonquin Commons Theatre this Friday night. For the occasion, the independent artist will be sharing the stage with special guest Adrienne Taylor. 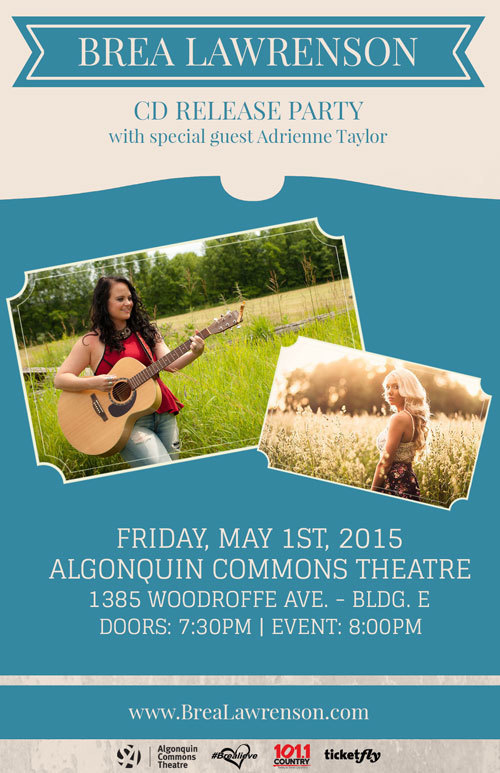 Toronto easy rock band Blimp Rock will be releasing their second album “Sophomore Slump” and giving a show for the occasion at Raw Sugar Cafe this Friday, May 1. The 4-piece will be sharing the stage with Ottawa alternative folk group Winchester Warm for an intimate evening of live music. Oh and there’s gonna be a PowerPoint presentation?

Local favorites Hilotrons will be having a vinyl release show at the Blacksheep Inn in Wakefield this Friday and to celebrate the experimental electro funk dance group be joined by special guests Theaternia and The Dark Plains, which is an interesting choice of opener given the fact that there’s a post rock band. To add to the senses, there will also be visual projections courtesy of Hard Science.

The 613 Night Market is back by popular demand! This Saturday at the Ottawa Convention Centre, immerse yourself with the ultimate street-food and shopping experience featuring the capital city’s bad-ass chefs, talented creators, crazy artists and daring entrepreneurs.

This Saturday, Wall Space Gallery presents new works by visual artist Stefan Thompson. The vernissage will be held from 7-9 pm and the exhibition will be on display until May 24 for those who can’t make it to the launch.

Ottawa alternative folk singer-songwriter and guitar player Cody Allen will be releasing his fourth album on May 5 and to mark the news, he’s having a release party at Irene’s Pub this Saturday night with local indie folk rock 5-piece Miss Polygamy.

The irresistible Mackenzie Rhythm Section will be performing live at the Petit Chicago in the Hull sector of Gatineau this Saturday night. The local funk, soul and rock n’ roll band who’s gaining a reputation for its excellent live shows, is sure to perform songs off of its upcoming new album and get you dancing from start to finish in the process.

Non Phixion are embarking on a special 20th anniversary tour that is taking the NYC hardcore hip-hop group to Ottawa as part of a mega reunion with all original members. The guys will be making a stop in the capital this Saturday night and for the occasion, they’ll be sharing the stage with Ottawa hip-hop heavyweights Flight Distance, rising local hip-hop duo Buck N’ Nice, as well as locals Aspects and M.I.M.E. 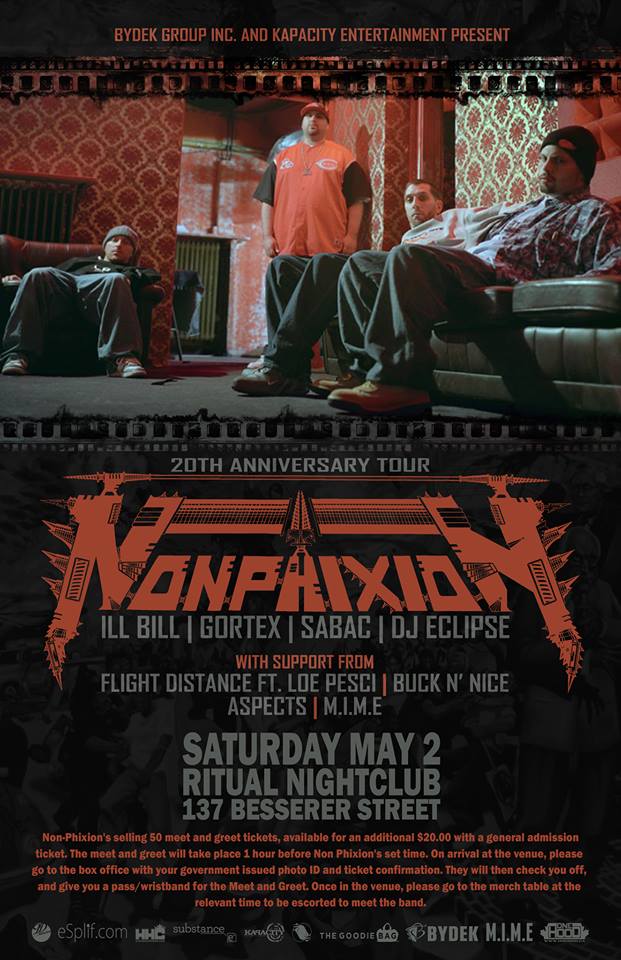 This Sunday May 4, Spectrasonic and the Ottawa Bluesfest present Dublin folk rock band The Waterboys live at the Bronson Centre. For the occasion, the group will also perform with Woodstock folk rock multi-instrumentalist Connor Kennedy and Minstrel. 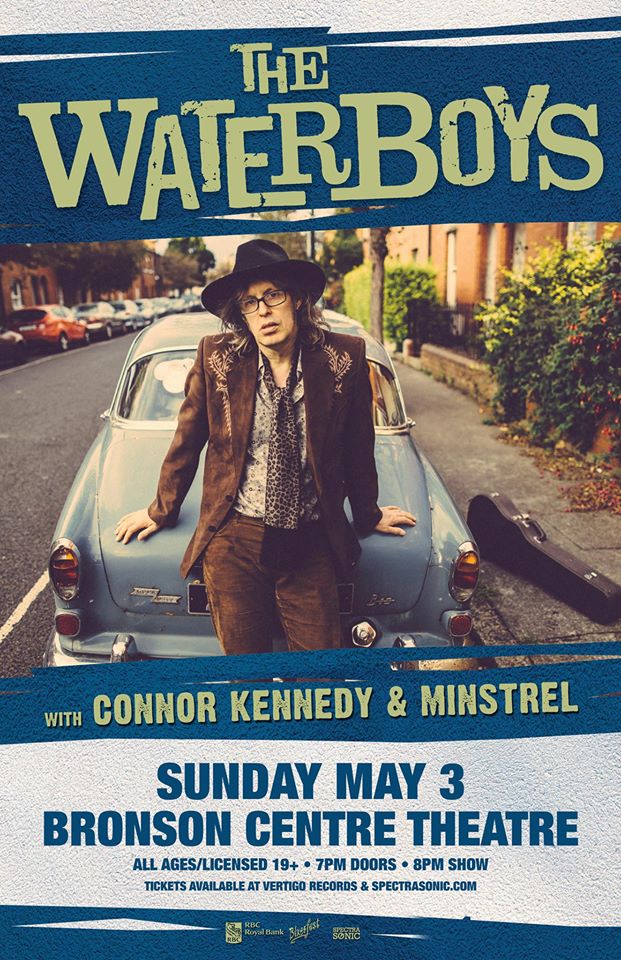 Indie drone/noise/folk group Six Organs of Admittance will be giving a live show in the capital city this Sunday night. Joining them on stage will be Hartford indie noise/rock artist Elisa Ambrogio. 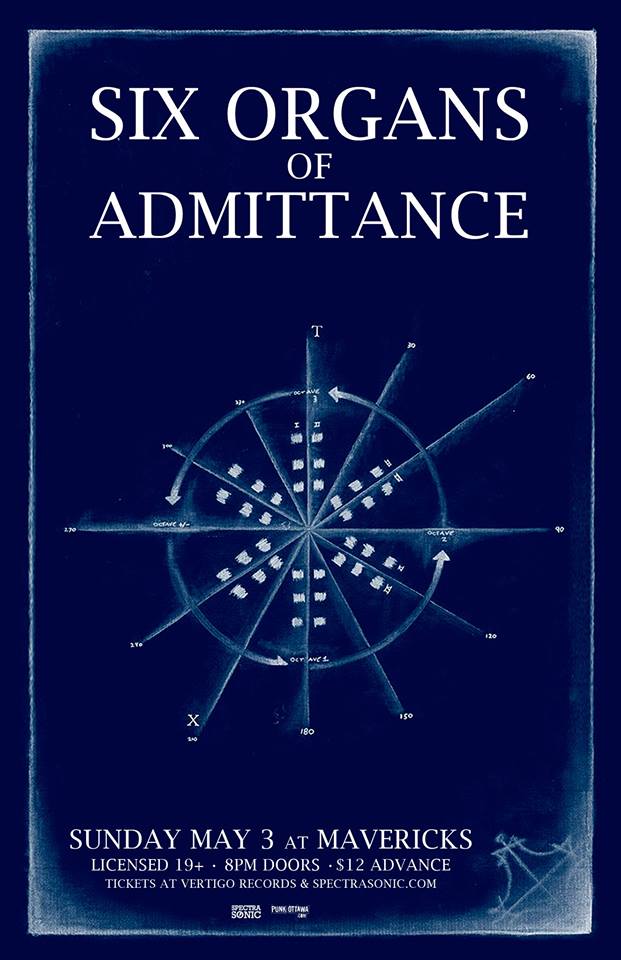