Early September in the National Capital: From Passion Pit and Electric Fields to the Ottawa Fashion Week and the HoPX Festival

The weather forecast is on the rise this week in the National Capital Region, a clear sign that summer is not over. Regardless of the temperature however, there’s plenty to keep you culturally active wether you’re looking for music, poetry slams, fashion shows, burlesque or breakdance battles.

To kick things off in music with a twist, Jackpine Artistic Director Liam Mooney and Ottawa artist Adam Kronick have organized Banned: A Live Projection Experience in response to the new federal that requires venues with a primary business other than music that also books foreign bands or performers to pay an application fee of $275 per musician plus those traveling with the band and an additional $150 per person if accepted. Many think this is bullsh*t. So as a result, organizers are circumventing the regulation by streaming an exclusive show by Old Monk live from Brooklyn, New York. The event, which is taking place at Babylon this Monday, September 9, will also feature live performances by Benoit Christie, Atherton, and Dany Laj.

The 10-year anniversary of House of PainT is being held from Wednesday, September 11 to Sunday, September 15 at various locations across the capital city. The community festival, which celebrates hip-hop arts and culture, will be celebrating its decade with 5 days showcasing an eclectic roster of local, national and international artists representing all five pillars of hip-hop culture. House of PainT will kick off with an audience-judged poetry slam and House of Merc party on September 11. The lineup will also feature a hip-hop show with headliner DL Incognito, a graphic art show and MC showcase, a live performance by hip-hop culture pioneer Afrika Bambaataa and legendary rapper Big Daddy Kane, and a knowledge conference geared towards Ottawa’s urban arts community without forgetting the Main Event under Dunbar Bridge with something for everyone.  The local scene will be represented by DJs Illo, Magnificent, Kid SL and Shub from A Tribe Called Red as with Missing LinX, Jaguar Priest, and D-Trak. 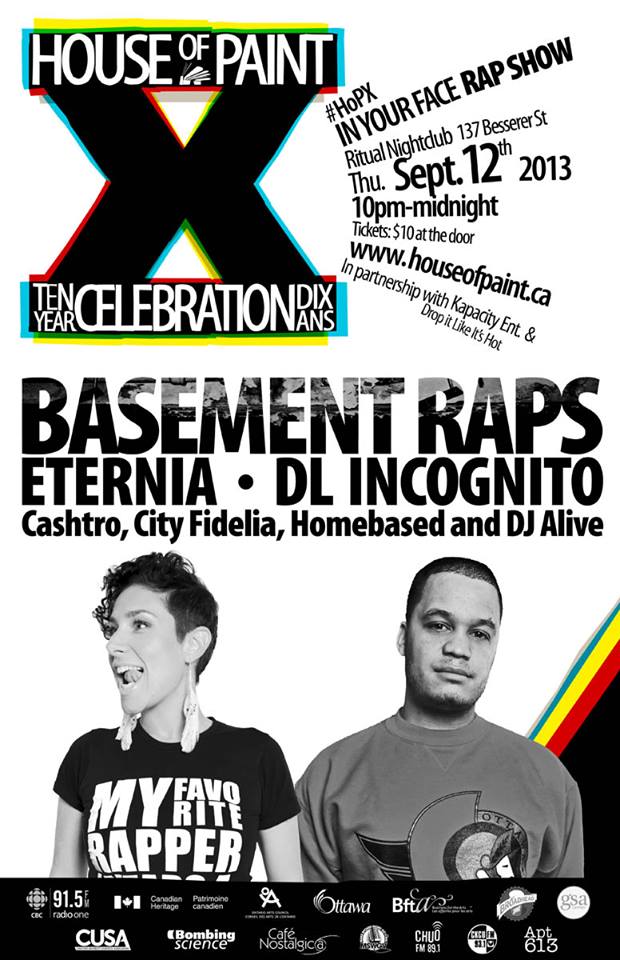 Artengine presents the 2013 Electric Fields Festival from September 11 to September 15. This year’s original edition, presented under the theme We Make the City! We Are the City! will feature choirs in public squares, a bicycle music ride along the canal, secret stories on street corners and a magic maze popping up in the park. Organizers invite you to come experience the city in a new way by being a part of these uniquely creative projects. If you’d like to join the conversation online, you’re invited to use the hashtag #wemakethecity.  Find out what it’s all about by clicking on the below poster.

If you’re a fan of Passion Pit and didn’t get to see their awesome set at Bluesfest this past July, you’ll be happy to know that the indie electro-pop band from Massachusetts will be performing live at the Algonquin Commons Theatre this Thursday, September 12 as part of GonqFest. The group will be joined on stage by Montreal-based indie synthpop group Young Galaxy, who’s been shortlisted for this year’s Polaris  Music Prize. 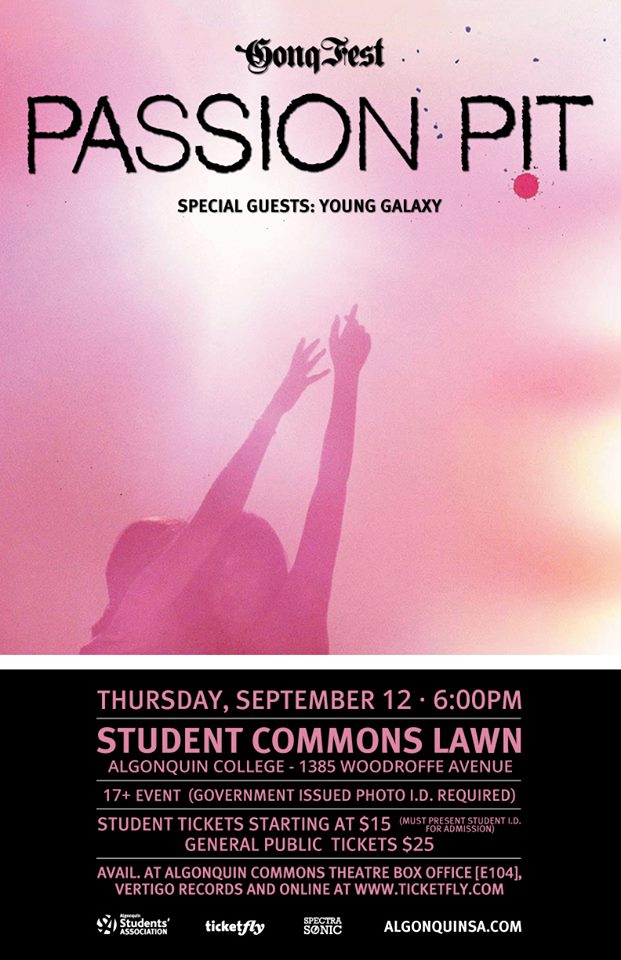 If you’re into black and doom metal, you may want to check out Cauchemar at Cafe Dekcuf this Thursday, September 12. The Montreal-based group will be joined on stage by local bands Monobrow and Occult Burial.

Illvibe presents Survival of the Illest at Ritual this Thursday, September 12. The event is Canada’s platform to showcase the best performing hip-hop MCs. The night will feature 8 local MCs who’ll perform on stage for a chance to win the title. Once the performers have gone head to head, the jury will select their two favorite acts to perform an encore. The crowd will then get to choose between these two finalists to crown the winner.

Starting this Friday, September 13 and taking place until Sunday, September 15 is the 10th season of Ottawa Fashion Week. Local and national designers will have the opportunity to present their upcoming Spring/Summer 2014 collections at the Casino Lac-Leamy in front of media, members of the pubic, dignitaries and celebrities from the Canadian fashion industry.  Get the full programming by clicking on the event poster below.

Those of you who enjoy burlesque should definitely attend Theatre Carnaval presented by Capital City Cabaret at Centrepointe Studio Theatre. The event, taking place on Friday, September 13 and Saturday, September 13, will include live circus, cabaret, burlesque, and vaudeville peformances featuring a slew of local and regional artists.

Fans of EDM will want to go to Barrymore’s on Friday, September 13 to catch Black Tiger Sex Machine. The Montreal trio will be giving a live DJ set that will include drums and keys alongside their signature tiger helmets. BTSM will be joined on stage by DJs Dabin, Baretta, and Foster.

The people behind Ottawa Explosion bring you another edition of Funhouse! this Friday, September 13. The event, which is taking place at Mugshots, will feature special guests Joel & Pat from Asile who’ll be spinning some serious punk alongside resident DJs Craig Peru and Skid Vicious who’ll take care of the rest. 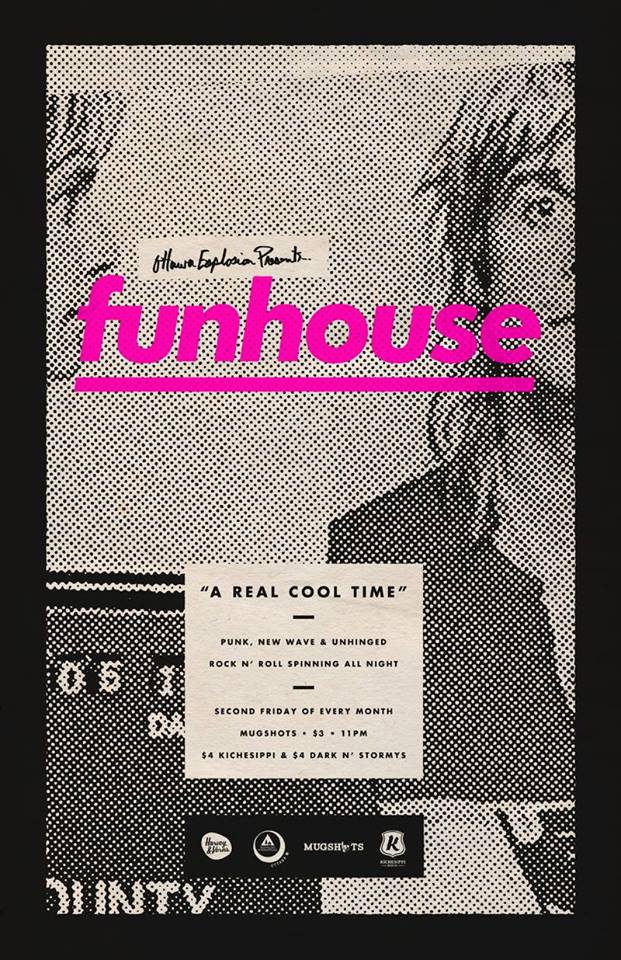 Loh El the Minstrel, Brad Morden and Benoit Christie invite you to a night of music and poetry at Raw Sugar Cafe this Saturday, September 14. The three local artists are bringing together a unique and intimate fusion of music, song and poetry for everyone and anyone who’d like to take in their live art. 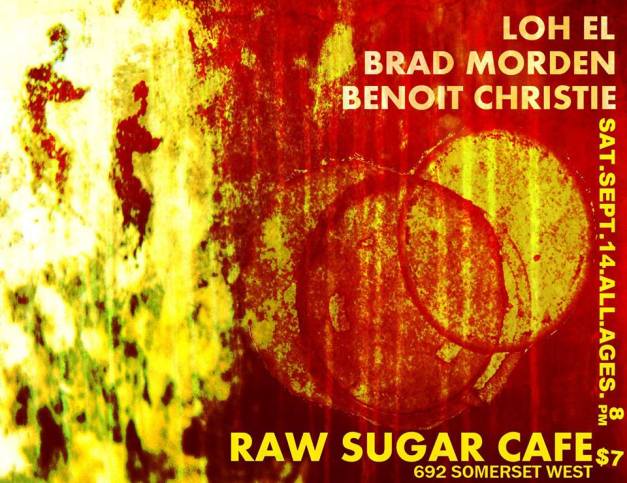 After presenting two successful events, The International convenes latin lovers one last time this summer for the Latin Sparks Finale happening this Saturday, September 14. Taking place outdoors along Sparks Street, the block party promises to offer a night of dancing under the stars with complimentary dance workshops, latin music, latin cuisine and live percussionists and entertainment.

This event has unfortunately been cancelled

Celebrating the End of the World in the National Capital: From Afrika Bambaataa to Double Barrel

The Holiday Season is in full swing in the National Capital Region and aside from the numerous office parties and family gatherings, there are many fun events happening around the city.

For the skeptics who still believe that the world is ending this Friday, December 21, rest assured that we should still be here when we awake on Saturday morning. This being said, Ottawa’s event organizers and promoters have taken advantage of this superstitious belief to present a variety of events set to celebrate our last day on earth.

To start the week’s events on the Gatineau side, the Petit Chicago is presenting the tri-monthly edition of Fau Mardi, an audio-visual night focusing on electronic culture and bringing forth the local and emerging talent of the Gatineau-Ottawa region. This week’s installment features performances by Lozen, Lake Districts alongside residents Phil Beauch and VJ Sasha Vreca.What better than a free electro audio-visual event on a Tuesday night? Not much, not much at all! Find out more by clicking the poster below. 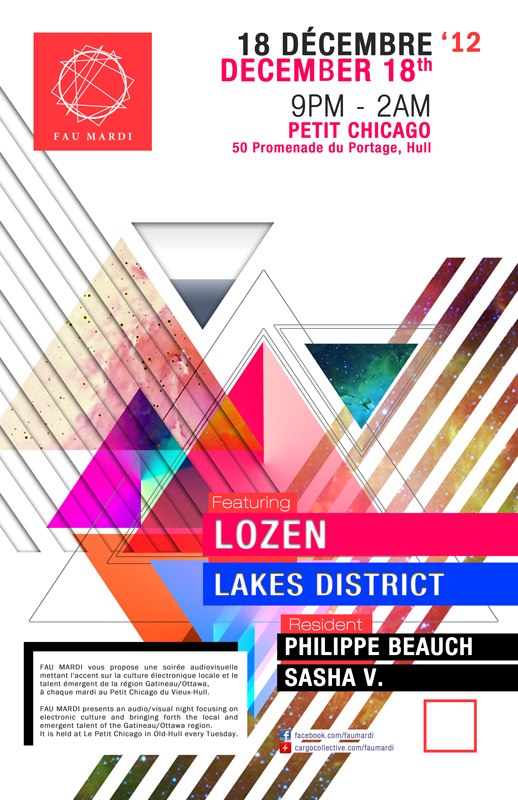 This Thursday, December 20 is the monthly edition of Hip Hop Karaoke at Babylon with DJ So Nice and Atherton. The two hosts promise a night of fun with this twist on traditional karaoke that steps away from the conventional “mom n’ pop video screen bouncy ball read-a-long half-assed last-minute-plan-with-your-girlfriends-in-korea-town karaoke jam”. If you think you got what it takes to rap along to your favorite hip hop song, sign up for this Thursday! Check out all the details by clicking the poster below.

On December 20, Bassline presents Trapocalypse with the mysterious ƱZ at Mansion Nightclub. The trap DJ currently affiliated to Mad Decent and Jeffree’s will be dropping a live set alongside Givehimmeds and Slightly Famous. Organizers are urging attendees to “dress like the world will be ending” which gives you a taste of the kind of party of you can expect. If you’d like more info, click below!

This Friday, December 21, DJ Magnificent invites you to celebrate the holidays with the monthly installment of Double Barrel provided that we all survive the end of the world. The recurring event, which takes place at Mugshots, will feature the usual Motown, Funk, Soul and Reggae sounds. Ugly Holiday Sweaters are strongly encouraged. Grab everything you need to know by clicking the poster below.

Also, this Friday, December 21, you’ll want to head over to Ritual Nightclub to partake in Farewell to Free Bass with Mark Instinct and Mayhem if you’re into bass and dubstep music. The final night of Free Bass is brought to you by Bass Machines, Capital Boom Records and Kapacity Entertainment. The organizers also wish to celebrate the end of the world as we know it…! Grab more details below.

Provided that we survive the end of the world, Cumberland Haus presents Haus Party Round Two with Jon Deck and Ghettosocks at Ritual Nightclub this Saturday, December 22. Deck and Ghettosocks will be celebrating the release of their collaborative mixtape entitled  We’re Going to Drink Alot of Wine This Year Boys along with playing the best in hip hop and trap. There will also be a guest appearance by none other than the man himself, Santa! For more information on this event, simply click on the below poster.

This Sunday, December 23, regardless of what you have planned you’re going to want to reschedule those plans to attend Stamina & Kapacity’s Annual Christmas Party featuring the legendary Afrika Bambaataa who’s considered the grandfather of Hip Hop culture and the father of Electro Funk. Afrika Bambaataa will be throwing a live DJ set upstairs in the Main Room alongside DJs Illo, Kid SL, ThreeSixty and Karl Haze. There, you can expect the best in Hip Hop/Breaks/Electro/Funk/DnB. As for downstairs in the lounge, be prepared for some Classic House and Techno with Pedro Diaz, the founding father of Ottawa’s Electronic scene and owner of Bowggy Records and DJs Jamez, Rayaz and Balu. Click on the poster below for more event info!

So there you have it ladies and gents, my event suggestions for the upcoming days! Enjoy the week ahead to the max and be sure to live it up by attending an event or two in the Nation’s Capital!