Eventful Capital’s Weekly Picks: From Ottawa Explosion and the Fringe Festival to GlowFair and DJ Premier

Festival season is upon us and as a result the National Capital Region is buzzing with events. If you’re in our lively city this week, be sure to check out some of the great shows and festivals taking place in and around Ottawa-Gatineau in the days ahead. Take a look at Eventful Capital’s weekly picks below for a glimpse into some of the noteworthy things that are scheduled.

Meat lovers rejoice: the sticky social that is the Ottawa Ribfest is back and once again happening along Sparks Street from June 17 to June 21. Ribbers from all over North America will be on site to sell their best BBQ ribs, chicken, pulled pork and more. The festival will feature a pulled pork eating contest along with live entertainment and offers free admission.

The 2015 Ottawa Explosion Weekend runs from June 17 to 21 at various locations across Ottawa including Club Saw, House of Targ, Mugshots, Cafe Dekcuf, and Avant-Garde Bar. This niche music festival, which features underground punk, rock, garage, indie psych pop bands from the region and beyond will present over 75 groups, the majority of which you’ve probably never heard of, but that you should definitely discover and encourage if you’re into that kind of music. This is what the Ottawa Explosion Weekend is all about, a really loud, really fun celebration of underground punk rock music.

Ottawa’s largest theatre festival, the Fringe, is back for its 19th season from June 17 to June 28 at 14 different downtown venues. The 2015 edition will feature over 400 performances, many of which are local-based productions. The Fringe is one of the city’s most accessible festivals with tickets for performances priced under $12. What’s more, 100% of ticket sales go directly to the performers, and that alone is seriously amazing and worth supporting.

Rock Fest, the biggest rock festival in Quebec, is celebrating 10 years with its 2015 edition happening from June 18 to June 21 in Montebello, Quebec, roughly 40 minutes from downtown Ottawa. This year’s instalment, which promises to continue offering an improved experience, will feature live performances by some big headliners including Linkin Park, System of a Down, Slayer, Deftones, Rancid, Bad Religion, Gogol Bordello and Les Cowboys Fringants among many others. Click below for the full festival schedule.

The world renowned Beenie Man will be making an appearance in Ottawa this Thursday, June 18 with the Zagga Zow Band. The Grammy award-winning Jamaican reggae artist will be performing live at Barrymores alongside special guests Future Fambo, Kantana and Cee Gee.

Another huge name coming to town for the hip hop heads this Thursday night – the legendary DJ Premier will be rocking the 1s and 2s at Babylon as part of the 7″ Of Pleasure Tour. The man behind an innumerable amount of productions and beats will be giving an all-vinyl set and for the occasion he’ll be sharing the stage with DJ Pump, Vinyl Ritchie and DJ Illo.

Glow Fair is back and building on last year’s inaugural success. The festival’s second edition, once again free to attend, will feature art performances, vibrant music shows and state-of-the-art light projections, which will make a stretch of Bank Street come to life on June 19 and 20. Headliners include Kiesza, Jokers of the Scene, Torro Torro and The New Deal. Be part of the action and experience the core of Centretown like you’ve never seen it before.

The popular Ottawa International Jazz Festival is kicking off this Thursday, June 18 and continues until July 1. One of Ottawa’s longest running festivals and a recognized household name that’s been around since 1980, Jazz Fest will present an eclectic lineup for festival-goers looking for a bit of everything. This year’s roster includes headliners The Roots, Chris Botti, Pink Martini, Snarky Puppy, and Tanya Tagaq among others. Organizers have also included several local acts to the programming namely Harea Band, The Mackenzie Rhythm Section and Old Stereo among others. As per usual, all of the performances taking place on July 1 offer free admission. Check out the full lineup by clicking below. 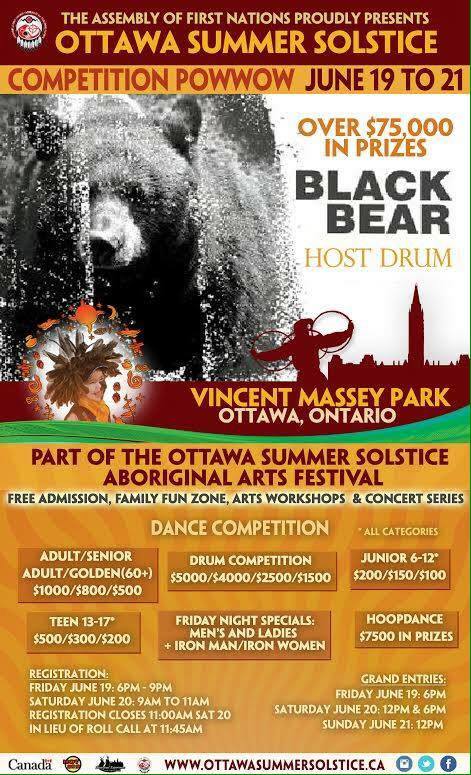 This Friday, June 19, local artist and photographer Jehu Jacob Mahautiere invites you to join him for his first photo exhibition dubbed Unique Elements. The event, being held at Prinzo on O’Connor, will include a glimpse into some of the artist’s work as well as tasty bites and refreshments. A party will follow the exhibit viewing featuring music by DJ Unique One and Felix Nashito. 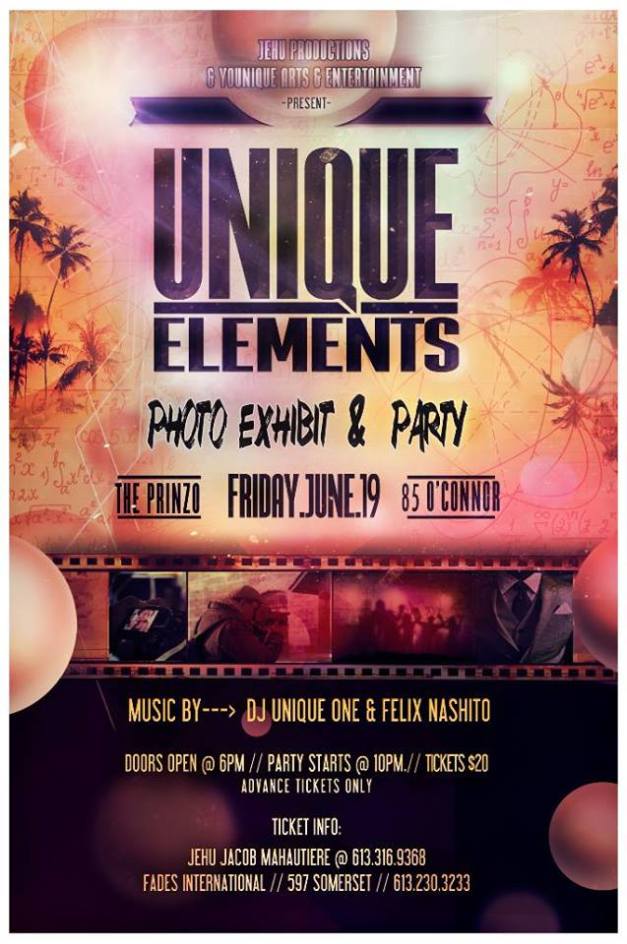 If you’re into folk music and looking for something low-key, check out Thanya Iyer live at the intimate Pressed Cafe this Friday night. For the occasion, the soulful Montreal folk/jazz band will be joined by Ottawa alternative folk/rock singer-songwriter and guitar player Claude Munson.

There’s a special edition of 90s or Bust going down this Friday night as part of GlowFair. The popular monthly features the best in 1990s and early 2000 hip-hop and r&b so if you’re looking for an old school vibe dance party that’s probably where you wanna head out.

This Friday night, SPOOR presents The Deep End at Ritual. In this 5th instalment the SPOOR crew bring you a substantial array of furious techno beats all through the night. As per usual they’ll be staying true to their signature style while bringing a unique experience; intersecting music, lighting and video projection. This is a night for your open to exploring the scenes of techno, house, and electronic music.

Carivibe, the festival celebrating Caribbean culture in the Nation’s Capital, is back at Petrie Island on Saturday, June 20 and organizers invite you to reach the beach. This annual beach party, which offers a diverse array of tropical rhythms, cuisine, carnival and culture, will celebrate the 2015 edition with headlining performances by Olatunji, Chucky, Karl Wolf and others. Find out all about Carivibe by checking out their website below.

Canadian hip hop icon Relic is set to drop his full length album “The 13th Floor” with a release show happening this Saturday, June 20 at Zaphods. For the occasion, the independent rapper will be sharing the stage with Ottawa/Toronto hip hop duo Philly Moves, Juno-nominated artist Ghettosocks and MV, the rapper formerly known as Tukan.

Following The Roots’ live performance at the Ottawa Jazz Festival, member Questlove will be giving a 3-hour DJ set at Ritual. If you didn’t catch his excellent set last time he was in the capital city, now’s your chance. This is sure to sell out so if you want to attend and dance to the selections of this music guru, be sure to grab tickets ahead of time. This time around, the opening set will be held down by local DJ Frank Play.

Silk, the best R&B dance party in the capital city, is making a return this Saturday night at its new outdoor spot over at 73 North on Sparks. As per customs, resident DJs Matty McGovern, Matt Tamblyn and Eric Roberts will take care of playing your favourite R&B  hits while you dance the night away in the open air.