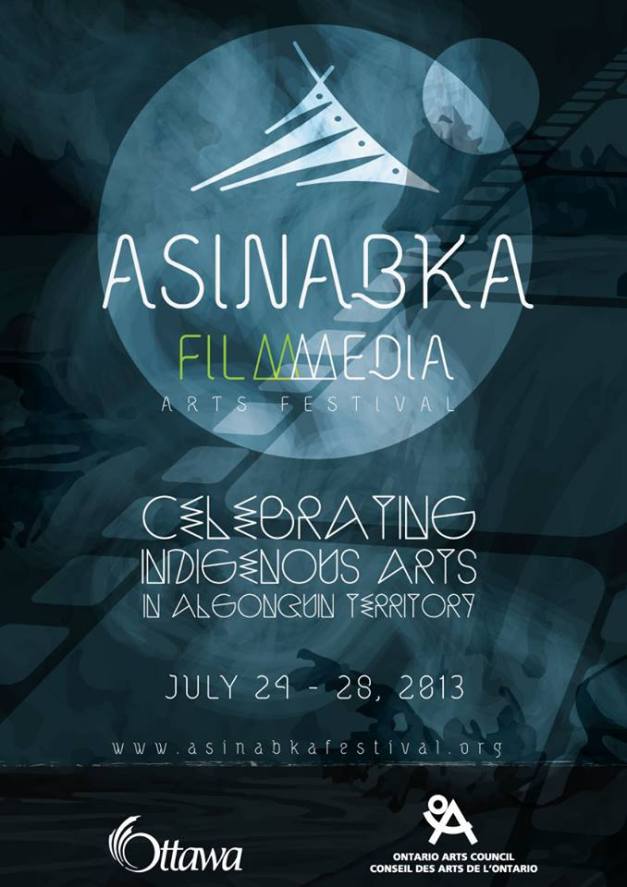 For the second consecutive year, Ottawa prepares to welcome the Asinabka Film & Media Arts Festival in celebration of Indigenous arts on Algonquin Territory.

Following a successful first year, the annual festival is back with a 2013 edition that promises to offer a rich and engaging programming emphasizing art works that examine Indigenous issues and topics. The festival will take place over four days and will feature film screenings and gallery crawls, some of which are being held outdoors.

In an effort to promote this year’s festival, Co-Director/Programmer Howard Adler kindly accepted to take a break from his busy schedule to answer a few questions for Eventful Capital.

Eventful Capital: The Asinabka Festival saw the light in 2012 and after a successful inaugural edition you’ve decided to bring it back for 2013. What pushed you to get together with like-minded people in the first place to create Ottawa’s first Indigenous arts and media festival?
Howard Adler: What brought us together to organize the festival actually started on Victoria Island in the summer of 2011, when a few friends were meeting there once a week for a language group to practice speaking the Ojibwa language.  One day, it started pouring rain as we were leaving, so we escaped the rain by going into the Library and Archives Canada building, which turned out to have an Indian Film Festival happening at that time.  We ended up watching this great Bollywood film, which invariably led us to a discussion about Indigenous film and arts, and the lack of an Indigenous film festival in the Nations Capital!
Eventful Capital: What is the main objective behind the festival?
Howard Adler: The objectives of the Asinabka Festival are to present works that examines Indigenous issues, to encourage discussion and dialogue about these topics, and to support artists and filmmakers by giving them a space where their work can be seen.
Eventful Capital: What do you hope to accomplish with this year’s festival?
Howard Adler: With this year’s festival, we hope to highlight film and media arts that are beautiful, relevant, entertaining, innovative, and that reflect the diversity and realities of Indigenous peoples.  We also hope to gain larger audiences, to become an important part of the local Ottawa arts scene, and to be important to artists and filmmakers within Canada and beyond.  Ultimately, we want to build the festival into something that is relevant in terms of the content of our programming, but that is also an asset to artists and filmmakers, and that supports communities.
Eventful Capital: Very neat! Ottawa can only benefit from this type of festival to foster understanding and diverse views. Based on last year’s attendance and feedback, how has the public’s response to the festival been so far?
Howard Adler: Based on last years Festival, the public really enjoyed our events, with some that were even sold-out! Our Gallery Crawl, which featured 2 curated Art Exhibitions at Gallery 101 and Fall Down Gallery, and an evening of performance, was really well received, and so was our outdoor film screening on Victoria Island.  Because of the success of these events last year we’ve actually continued them at this years festival!
Eventful Capital: If you can narrow it down, what are your top picks/recommendations for festival-goers with respect to this year’s programming?

Howard Adler: It’s so hard to choose, but here are my personal top 5 picks for this years festival: Our pre-festival event “Dinner & A Movie” at Mitla Cafe with Traditional Oaxacan Cuisine, “In-digital”, our curated art exhibition at Gallery 101 with artists Jason Baerg and Christian Chapman, our outdoor screening of Anita Doron and Richard Van Camp’s Film “The Lesser Blessed”, Our Q & A with Alanis Obomsawin at the screening of her film “The People of the Kattawapiskak River” and “Fabulous Fantasies”, a late night short film program screening at Club SAW.

Eventful Capital: These all sound super interesting! Thank you for taking the time to speak with Eventful Capital, Howard! We look forward to checking out this year’s featured films and exhibitions at the various locations and wish you tons of success with the 2013 Asinabka Film & Media Arts Festival.

You can check out Asinabka’s full festival programming below and visit the festival’s official website for more information. 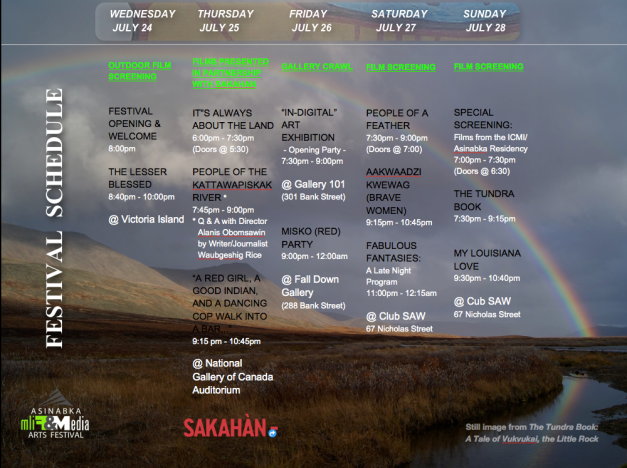 One comment on “Special Feature: Ottawa Welcomes the 2013 Asinabka Film & Media Arts Festival between July 24 and 28”