Last night, I joined some friends who were headed to Le Petit Chicago in Gatineau, Quebec to attend a rather entertaining show to say the least.

People trickled into the bar slowly until there was a sufficiently decent crowd to start the night with the opening act. The show itself started with D-Track, a local artist who has been around the Quebec Slam Poetry and Hip-Hop scene for some 10 years and who primarily delivers his lyrics in French. D-Track charmed the crowd with his witty rhymes and live band comprised of a drummer, a guitarist and keyboardist, which he often encouraged the public to applaud and give props to. It was my second time seeing him perform, the first being when he offered some slam accompanied by a violinist, a very unique and beautiful mix!

After D-Track’s 30-minute performance, the main act, which most had come to see, soon followed. Now how can I possibly describe Alaclair Ensemble appropriately and do them justice for those of you who are unfamiliar with Quebec hip-hop? Well, here’s a photo to give you a taste… 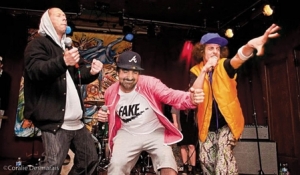 The boys, who are all from somewhere between Quebec City and Montreal, stopped through Gatineau as part of their Lower Canada tour and presented pure entertainment and over-the-top craziness from start to finish as they jumped around and did the chicken dance on-stage and delivered track after track of highly comedic hip-hop. Many would say, Quebec’s rap at its finest!  Their bizarre style and unique approach certainly left a strong impression on me who had vaguely heard of the group before venturing out to discover Alaclair Ensemble. These guys definitely can’t be taken seriously as each one brings a unique persona to the Ensemble from the token black guy to the DJ with alien goggles. The group gave a highly energetic performance and the crowd seemed to love every minute of what the guys had to offer, many reciting with Alaclair the lyrics to their favorite songs. Overall, a great discovery for those who enjoy French rap! Big ups to Le Ptit Chicago for putting together another great indie music show on the Quebec side 🙂